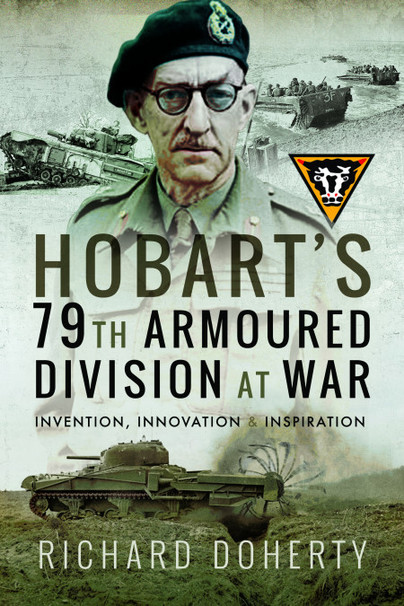 Add to Basket
Add to Wishlist
You'll be £14.99 closer to your next £10.00 credit when you purchase Hobart's 79th Armoured Division at War. What's this?
+£4.50 UK Delivery or free UK delivery if order is over £35
(click here for international delivery rates)

Hobart's reputation as an armoured warfare specialist began in the pre-war era. In 1923 he transferred from the Royal Engineers to the Royal Tank Corps and quickly established himself as one of the foremost thinkers on armoured warfare. By 1938 he was GOC Mobile Division, later 7th Armoured Division, in Egypt. Unable to suffer fools at all, he was relieved of his command (sacked!) in 1939, retired in 1940 and became a corporal in the Home Guard.

At Winston Churchill's inspired behest, he was ordered to create and command 11th Armoured Division. Although he trained the new division to a very high standard, he was seen as too old to lead it in action he was 57. Instead he was told to form 79th Armoured Division and design specialized armoured vehicles necessary to breach the Atlantic Wall. The Division played a major part in the D-Day landings and the subsequent campaign in NW Europe. Hobart's Funnies included mine-clearing tanks, bridge-carrying tanks, flamethrowers, swimming tanks and amphibious assault vehicles.

Brigades and units of the Division were deployed wherever they were needed by Second (British) and First (Canadian) Armies and no major operation between Normandy and the final victory took place without them present.

Percy Hobart's skills played a significant part in the final Allied victory and the lasting tribute to that vision was the adoption by all armies of the specialized funnies that his Division introduced to modern warfare.

This book is based on official records, published materials and personal recollections.


Richard Doherty is a prolific author with a vast knowledge of the Second World War.
The book covers the strategic and the tactical; at times describing both unit actions and the bravery of individuals through telling the story of the division and its widely dispersed units and the dangerous roles it undertook.