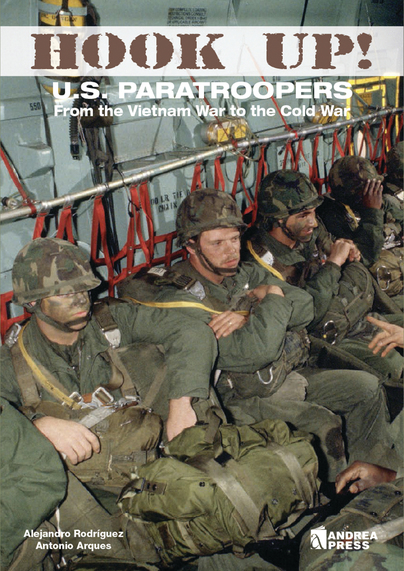 US Paratroopers from the Vietnam War to the Cold War

Add to Basket
Add to Wishlist
You'll be £35.00 closer to your next £10.00 credit when you purchase Hook Up!. What's this?
+£4.50 UK Delivery or free UK delivery if order is over £35
(click here for international delivery rates)

The first 'serious' proposal for the creation of an airborne force dates back to the late 18th century with the first - really effective - forces of this kind debuting in WWII, achieving remarkable and well-known feats of arms.

Despite the relatively minor strategic importance often attributed to these forces, the captivating allure of these daring soldiers their gear and the associated technical complexities have always drawn the curiosity and admiration of those interested in military history.

Mr Rodriguez has been gathering documentation on the history of the U.S Paratroopers for a number of years whilst putting together an extraordinary collection of uniforms, weapons and equipment covered in this book.
The history, gear, uniforms, training and tactics used by the US Paratroopers at the time of the Vietnam War is depicted in detail through a comprehensive text and over 700 outstanding photographs most of them never published before.

A slightly ambiguous sub-title is my only criticism of the outstanding book covering the history of U.S. paratroopers, virtually all in glorious colour. With the odd exception even the WW2 photographs are in colour which highlights how much easier this product was to get hold in the U.S. while the rest of the world remained in black and white for many more years. A very slick piece of publishing, the book is well designed and suited to its large format and hardback cover; a good old-fashioned coffee table book!
The two author’s leave no stone unturned and chapters cover Operation Junction City (Vietnam 1966), boot camp, equipment which includes harnesses and types of parachutes, combat loads and insignias, the latter covering every single badge available from Riggers and Rangers to Paragliders to Pathfinders. The latter’s insignia is a winged torch which symbolises their ability to lead the way for airborne operations. Used during the Second World War it was not officially adopted until 1964, 20 years after the Pathfinder’s most significant operation during the early hours of D-Day.
This really is a brilliant book, the photography throughout, especially of equipment and soldiers wearing and operating are superb. Worth every penny to anyone interested in military history - highly recommended.

If you have an interest in the period of the Vietnam War then this will be interesting, but especially so for militaria collectors, for re-enactors who want to get their uniforms and equipment right, for sculptors who are interested in mastering figures of the period, and for model figure painters who want to get the detail right on their models, and a chance to check that the sculptor who mastered the figure has got it right.

For painters of figures and modellers looking for documentation on this subject, this book is the book.

A really extraordinary visual and pampered piece of work.

Excellent book on US Army Airborne forces from the Vietnam era. Well illustrated and worth the money.

Other titles in Andrea Press...