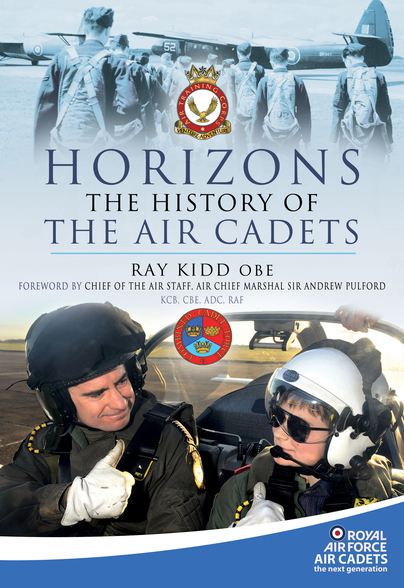 Horizons - The History of the Air Cadets (Hardback)

Add to Basket
Add to Wishlist
You'll be £35.00 closer to your next £10.00 credit when you purchase Horizons - The History of the Air Cadets. What's this?
+£4.50 UK Delivery or free UK delivery if order is over £35
(click here for international delivery rates)

Although the first air cadet unit was raised in Bournmouth in 1928, the first squadrons to be formed in a privately funded national organisation were part of the Air Defence Cadet Corps in 1938. Thousands of youngsters joined and were able to learn about aircraft, aerodynamics, navigation, mechanics and other subjects not taught in schools. The organization was to become known as The Air Training Corps (ATC) and as war loomed it was considered a useful RAF recruitment tool to attract potential airmen and ground crew.

Throughout the war ATC cadets supported the home defences by fire watching, as messengers and as observers, working alongside the Home Guard, the fire services and other vital organisations. During the second half of the 1900s the corps continued to thrive. Girls were now included and retired RAF officers and other ranks continued to take an active part in each squadron. There are now over 900 squadrons within the UK, providing the same skills to modern youth and teaching them the importance of personal responsibility and teamwork via annual camps at RAF stations, adventure training and flight experience.

This book looks at all aspects of the Air Cadet's history and tradition, including the RAF sections of the Combined Cadet Force attached to public and grammar schools. It concludes with an analysis of what subjects and courses are currently available with many past and present illustrations.

As seen in The York Press and The Scarborough News.

Everything you need to know is contained in this huge fine volume so fall in to read a full account of how young people benefit from training for service in the air.

Wing Commander Ray Kidd has now produced a comprehensive and liberally illustrated hardback account of the air cadets and in a manner which has made the wait worthwhile.
It is well worth the cover price for the pages of photographs, both colour and monochrome, alone.

Every Air Cadet in the country must surly obtain a copy of this comprehensive work, which will also prove surprisingly absorbing for anyone interested in the Royal Air Force.

RAY KIDD OBE joined 739 (Scarborough) Squadron Air Training Corps in 1947. Following national service with the RAF and time with the Royal Observer Corps, he returned to the ATC in 1964. Appointed to the Central and East Yorks Wing Staff in 1974, he was responsible for adventure training and the Duke of Edinburgh’s Award. He was appointed to command the former West Riding Wing ATC in 1980, followed by the Central and East Yorks Wing from 1983 to 1988.

As a civilian, he has held many posts, currently that of Wing President and Corps Historian. From 1990 to 2002 he chaired a DofE working party to foster interest and participation in the Award by the three cadet forces. Ray is a life member of the RAF Association, firmly believing in the need for close cooperation between the Air Cadet
Organisation and Service charities.

He has a supportive wife Jean, with daughters, Jane and Sally.