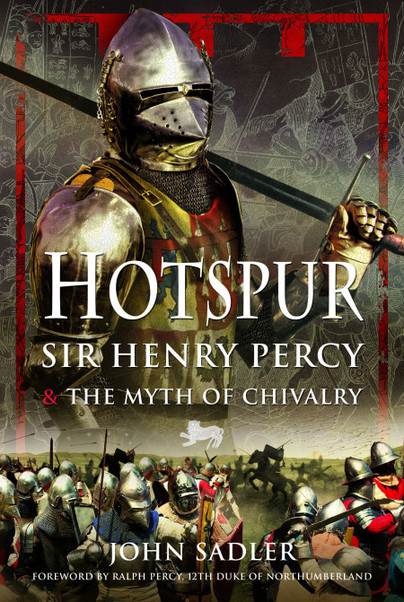 Sir Henry Percy and the Myth of Chivalry

Add to Basket
Add to Wishlist
You'll be £25.00 closer to your next £10.00 credit when you purchase Hotspur. What's this?
+£4.50 UK Delivery or free UK delivery if order is over £40
(click here for international delivery rates)

On 21 July 1403 Sir Henry Percy – better known as Hotspur – led a rebel army out at Shrewsbury to face the forces of the king Henry IV. The battle was both bloody and decisive. Hotspur was shot down by an arrow and killed. Posthumously he was declared a traitor and his lands forfeited to the crown. This was an ignominious end to the brilliant career of one of the most famous medieval noblemen, a remarkable soldier, diplomat and courtier who played a leading role in the reigns of Richard II and Henry IV. How did he earn his extraordinary reputation, and why did Shakespeare portray him as a fearsomely brave but flawed hero who, despite a traitor’s death, remained the mirror of chivalry? These are questions John Sadler seeks to answer in the first full biography of this legendary figure to be published for over twenty years.

Hotspur’s exploits as a soldier in France during the Hundred Years War, against the Scots in the Scottish borders and at the battles of Otterburn, Homildon Hill and Shrewsbury have overshadowed his diplomatic role as a loyal royal servant in missions to Prussia, Cyprus, Ireland and Aquitaine. And, as the heir to one of the foremost noble families of northern England, he was an important player not only in the affairs of the North but of the kingdom as a whole. So, as John Sadler reveals in this highly readable study, Hotspur was a much more varied and interesting character than his narrow reputation for headstrong attack and rebellion suggests.

Sir Henry Percy, from the same family as Lord Percy so brilliantly portrayed in the Blackadder series, is an historical figure who has also been immortalised in Shakespeare's Henry plays, and is surely one of the most important people to have lived and influenced our history. John Sadler uncovers many previously unknown facts in this amazing book that will keep anyone interested in medieval history interested,

This book follows the life of Henry Percy, we learn a history of his family growing up in Yorkshire and how he became a major figure on the Anglo-Scottish border. It’s an interesting story in that we learn a lot about politics and the interactions between families and those in power at the time. It was amazing to find how fickle people with their loyalties were, as it seems many chopped and changed their allegiances.

This book was also a good insight into the motivation of Henry Percy, how he progressed as a soldier, leader and schemer. His final campaign against Henry IV came very near to being a success. Overall, the book is very informative and I have learnt a lot, this book would be a great read for those involved in that particular period of time.

Overall this is an excellent biography of Hotspur, looking at him as a man of his time, and making some interesting suggestions about his plans during his failed rebellion against Henry IV.

The appendices are interesting reading too. I especially like the 2nd Appendix – the art of war in Hotspur’s day. I aslo found the glossary useful. Didn’t know what an ‘abbatis’ was until today.

This is a very interesting book about a time I need to learn more about... Overall an enjoyable and informative book.