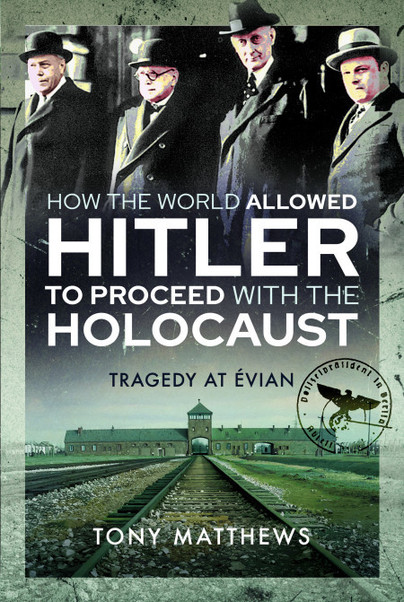 How the World Allowed Hitler to Proceed with the Holocaust (Hardback)

Add to Basket
Add to Wishlist
You'll be £25.00 closer to your next £10.00 credit when you purchase How the World Allowed Hitler to Proceed with the Holocaust. What's this?
+£4.50 UK Delivery or free UK delivery if order is over £35
(click here for international delivery rates)

In July 1938 the United States, Great Britain and thirty other countries participated in a vital

conference at Évian-les-Bains, France, to discuss the persecution and possible emigration of the European Jews, specifically those caught under the anvil of Nazi atrocities. However, most of those nations rejected the pleas then being made by the Jewish communities, thus condemning them to the Holocaust.

There is no doubt that the Évian conference was a critical turning point in world history. The disastrous outcome of the conference set the stage for the murder of six million people. Today we live in a world defined by turmoil with a disturbing rise of authoritarian governments and ultra right-wing nationalism. The plight of refugees is once more powerfully affecting public attitudes towards those most in need. Now, on the 76th anniversary of the liberation of Auschwitz and the end of the Second World War, it’s time to reflect on the past to ensure we never again make the same mistakes.

Tragedy at Évian also shines a spotlight on some of the astonishing and courageous stories of heroic efforts of individuals and private organisations who, despite the decisions made at Évian, worked under extremely dangerous conditions, frequently giving their own lives to assist in the rescue of the Jewish people.

"At times disturbing yet at times uplifting this narrative of a critical turning point in history is a necessary prelude to the unfolding of the Holocaust and all its associated terrors."

Reflecting on the past is always important. The issue of how the world simply sat back and let millions of people get murdered, a genocide, is something we need to face.

Mr. Matthews takes the time to highlight the stories of several very brave individuals who risked their lives helping the Jewish people. These are few of many, and their stories don’t get told nearly as often.

This was an awesome book, very well researched, and very important. I highly recommend it to anyone that doesn’t quite understand geo-politics of the World War II era other than a gross simplification of “us=good, Hitler=bad”. Be prepared to be angry, and be prepared to be sad, as this book will not help one be very patriotic as most countries involved look pretty terrible.

The title of this book says it all. That the holocaust could have been prevented is undenbiable and faily obvious. Tony Matthews puts it all into context in a way that will provoke thought and disquiet.

This account of the failure of the Evian Conference of 1938 to secure a managed and safe emigration of the primarily Jewish populations of Germany and Austria, is a frightening inditement of the ‘refuge nations’ attitude to those peoples. There was to be collective blame as to what caused the failure of producing any successful outcome of the conference however, the constraint imposed by the USA when calling for the conference that no change to immigration law was to be applied, predicated failure.
Despite the evidence that had been obvious since 1933 that persecution of certain minorities, especially the Jews, was an essential mantra of Hitlers’ ethnic philosophy, the majority of the world’s nations were ambivalent to halting the process. The book takes us through the convoluted maneuverings over the selections of delegates to the Conference and the constraints imposed on those delegates by their host governments compounding the inability to reach a meaningful solution.
Today, we are well aware what continued to develop into the holocaust but, the accounts at the end of the book that recount the actions by individuals to facilitate, at great personal risk, to secure the emigration of certain numbers of Jewish people especially children, is heartening and shows there was and still is good in this world.

The book was very well written and informative. The author had done a lot of research on this topic.

This has to be one of the most disturbing books I have ever read. In spite of all the teeth gnashing and moral outrage expressed at the end of WWII about the Holocaust, this book proves, time and time again, that the opportunities to prevent this annihilation of a group of people whose only crime was to be born a Jew were not simply missed, they were actively ignored and almost universally avoided. While there might be a small concession that the enormity of what would happen was beyond their ken, the leaders of the world decided to speak platitudes but do nothing.

The conference at Evian, about which much of the book focuses, was but one cog. The fact that the conference was held proves there was a recognition of a terrible situation. One would have needed to be deaf and blind to have not seen the increasing degradation of the Jews in Germany and Austria. Many voices were crying out for help. Why they were ignored is the most frightening part of it all. Why were nations not prepared to welcome the immigrants from Europe, often highly educated and successful people before Hitler came to power. One merely has to look back for two millennia and track the entrenched anti-semitism that has dogged Jews from place to place and country to country.

This was nothing new. Pogroms were a fact of life particularly in Eastern Europe and Russia. Whenever something went wrong, it was easier to find a scapegoat and the Jews were a convenient one for the Christian world. Many of the countries around the world that could have provided sanctuary refused and not just European ones but Canada, the United States Australian, essentially the entire world with very few exceptions like Denmark. Unlike the Germans who wanted to eradicate the “infection”, the declining countries did not wish to contaminate their people. It is a very thin line between the two.

While their inactions did not endorse Hitler, it convinced him that no one would care if he instituted a Final Solution. At the time he was probably right. It was only afterwards when faced with the reality of what occurred did nations stop and think and denounce. If lessons had been learned and hearts changed, there might have been some good to come out of such evil. Sadly anti-semitism is still just under the surface in many places and the same hatred shown to them has been replicated many times throughout the years since. The same slurs, the same vitriol, the same stupidity lives. Not in the vast numbers of the Holocaust but simply replace one group for another and you will hear the hatred perpetrated to this day- perhaps even amplified by the anonymity of the internet.

What is most distressing is the knowledge, the surety, that this could happen again. And if it does, will the world respond any better than it did in the late 1930s. I have my doubts.

Very interesting read. Gives you a lot to think about. The book is very well written. Would recommend this book. It’s always an interesting topic of conversation. Could be a great book for a book club

How the World Allowed Hitler to Proceed with the Holocaust: Tragedy at Evian by Tony Matthews is a detailed account of an often glossed over conference that truly did do as the title of the book states. Reading this will, if you adhere to any sort of moral or ethical system that values human life, make you at times angry, disappointed, and profoundly sad. It should also make you want to show that same emotion toward the many refugee situations taking place around the globe today and the inhumanity being shown by the various forms of nationalism.

While the focus is indeed the conference itself Matthews does a very good job of showing what was happening in various countries that influenced the various decisions to do little to nothing. Most of what the opponents to helping European Jewry stated as reasons weren't so much reasons as rationalizations for their antisemitism. Even many that wanted to help often used racist and offensive terms and generalizations.

I like the way the book is titled. I was taken aback a bit when the main title looked like what would usually come after the colon while the short phrase after the colon looked more like a normal title. But the way it is emphasizes that the world allowed the Holocaust to happen, that there was knowledge of what was happening and had been for some time. If a reader takes nothing else from the book take away the fact that all of these countries fighting the "good fight" are the same ones who implicitly sanctioned the Holocaust.

In addition to the background leading up to the conference (including a senatorial candidate suggesting the US learn from Hitler) and a detailed account of the conference we also learn about many of the people and organizations that tried, sometimes successfully sometimes losing their own lives, against all odds and with minimal government support from any country, to save as many people as possible.

It is hard to read some of the comments and rationales of those deciding not to help, thus sentencing many of the Jews to death, without hearing a lot of the various forms of current nationalism that so many countries are experiencing. Today's version is just as content to allow people who might not look like them or worship like them die miserable deaths as the version from the 1930s.

I would recommend this to readers who want to better understand exactly what most of the countries of the world did in the lead up to the Holocaust. If you have read and found fascinating how Germany could go from Weimar to Nazi, the background to the conference will serve the same purpose for those fighting the so-called "good fight." Readers who believe we can learn from the past will find many lessons here that urgently need to be shared today.

This book was an exceptional read!... Read over 2 days. Well researched and fully engaging!

Tony Matthews is a Queensland author who has dedicated almost his entire adult life to writing and researching Australian history. He also writes extensively on military and espionage history with a specific emphasis on both world wars. He is the author of more than thirty books including several historical novels.