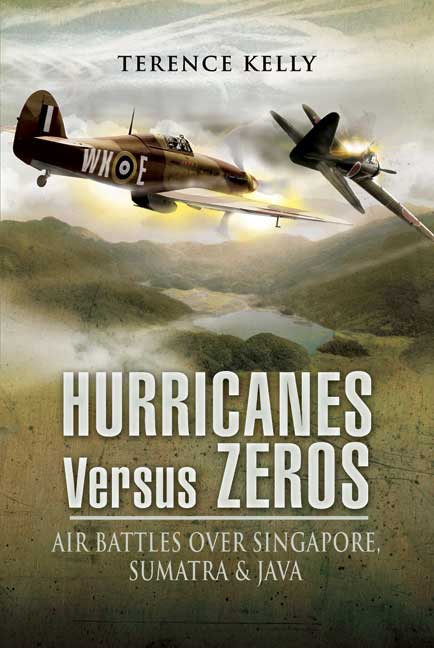 Add to Basket
Add to Wishlist
You'll be £19.99 closer to your next £10.00 credit when you purchase Hurricanes versus Zeros. What's this?
+£4.50 UK Delivery or free UK delivery if order is over £35
(click here for international delivery rates)

In this book the author not only tells his story of flying against the Japanese but he succeeds in painting a much wider canvas embracing the events leading up to and during the Japanese invasion of Singapore and the Dutch West Indies. The use of many individuals' accounts is possible due to his tracking down and interviewing those who fought with him. He does not lose sight of the 'big picture' and his speculation that defeat was not inevitable raises many questions of the quality of the Allied leadership. He chronicles not just the bravery of the defenders but the atrocities perpetrated by the victorious Japanese against combatants and civilians.

An excellent book originally published as "Battle for Palembang". I found this book very enlightening re guarding the circumstances of the allied losses in the early Pacific war. Terence Telly's skills as a writer are superior to most first person accounts of WW II that I have read. The story is gripping , exciting and frustrating.

The book is of nice quality also. The paper is very white and the print quite dark , providing good contrast and quite easy on the eyes to read. The pictures are detailed and clear. The jacket design deserves special mention, its a nice piece of art unto itself.

The only criticism I have is that the new title could be considered my some buyers to be a bit misleading as air combat is only part of what this book offers. However, I must say ,that I have been looking for this book for many years and I was not disappointed at all. I would consider "Hurricanes Versus Zeros" a must have for anyone interested in the history of that time period in SE Asia. As a father I will also be encouraging my son to read it as above all else "Hurricanes Versus Zeros", is a story about men, will power and the importance of leadership.