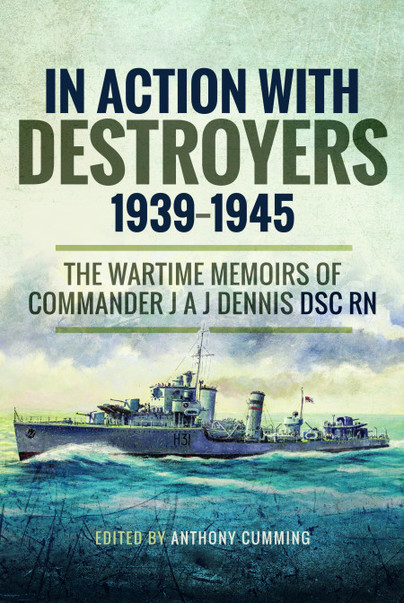 In Action with Destroyers 1939 - 1945 is a superbly written and exciting eyewitness account of the war at sea from 1939 to 1945. There can have been few, if any, naval officers who saw so much action as Alec Dennis, who served in four destroyers; HMS Griffin and Savage initially before commanding Valorous and Tetcott. While too modest to admit to it, he was mentioned in Despatches three times (Norway, sinking the Scharnhorst and in the North Sea) and awarded the Distinguished Service Cross (Greece 1942).

His war service also included the important but little known Madagascar operation, the Malta and Arctic convoys and D-Day.

For all the danger and action, Dennis recorded his remarkable experiences with a light even irreverent touch and, as a result, his memoir is not just a brilliant account of one man’s war at sea but a rattling good read.

In his journal Commander Dennis describes life on board Royal Navy destroyers. The terriers that ferreted out Nazi submarines' intent on sinking to Allied Atlantic convoys. Early in the war the Atlantic as U boats' hunting ground, sinking ships full of war weapons and food. Chasing after the hunters through groups of oil covered crew survivors, dropping depth charge at random. He describes the sinking of the German battleship Scharnhorst and pages packed with lists of German and Allied shipping that took part in his remarkable war.

The author Alec Dennis served on the Rodney and Repulse before transferring to destroyers. He served on four: was awarded the Distinguished Service Cross for his work in Greece and Mentioned in Despatches three time for action in the Atlantic and the sinking of the German battleship Scharnhorst. He retired to Canada when he left the Royal Navy in 1957 where he eventually became a teacher in Vancouver. He died in 2008.

A few pages of this book in the evening transports me to those momentous days of the Second World War and a feeling of what life was like on the workhorses of the fleet – the destroyers. A brilliant read!

This is one of the most engaging autobiographies I’ve read in a long time. Dennis is a very engaging writer, and has a lightness of touch that lifts the mood of even the darkest periods of the war... This is a splendid autobipgraphy – well written, engaging, fast passed, exciting and humerous. For every moment of tension and tragedy there is a period of light hearted relief, and one gets some idea of the special aspects of life in the destroyers, where the spirit of adventure of small warships in earlier wars was still to be found.

Fantastic biopic of Commander Dennis as he fought various WW2 naval battles on board a succession of British destroyers. Boys' Own Paper stuff - incredible heroics and bravery are recorded in this brilliant history of a larger than life naval hero.

Well-on quality paper in sturdy binding, this book deserves attention from those intresting in world war 2 destroyers in genral; or those of RN in particular.

The author produced a superbly written and exciting account of his service in destroyers during WWII, including command of Valorous and Tetcott. – Much Recommended

The whole book flows with the action like a good novel but this is fact and it is difficult to put down.
After the diary the editor has added a very good thirteen page summary of the wider picture of the war which places the actions in their context.
We thoroughly recommend this book to all.

Dennis writes with an easy familiar style, in impressive detail, and with great clarity, and even a welcome touch of wit/humour.

Definitely recommended, especially to those interested in the naval history of WWII.

While the work could be improved with the inclusion of contextual historiographical and footnotes, it is still a solid primary source for those interested in destroyer actions in the Mediterranean, English Channel, Arctic, and off Madagascar during the Second World War.

What I also liked is the fact it provides some insight of the personal life of the commander, his leaves, worries and joys in life at what must have been an extremely stressful number of years. I can recommend the book to those new to the navy history, but also to those already familiar with the RN’s WW2 history. This book just ADDS another welcome view to it all.

An exciting eyewitness account of naval war in the North Sea, the Atlantic and the Mediterranean...

...not just a historic and candid account of war at sea but also a terrific, page-turner of a book. A real-life thriller, it's as close to the action as you can get without actually being there.

A unique story that has been brought to a wider readership by the efforts of its editor. The destroyer was the backbone of naval operations in the role taken by the frigate in Nelson’s time. A fast paced story that grips the reader – Highly Recommended.

An extraordinarily powerful story illustrating the daily strains and courage of those who served, told in an understated way. The fact that Dennis’s family asked that royalties from the book go to Help the Heroes says it all.
Very highly recommended.

Alec Dennis DSC entered Dartmouth in 1931. After serving in the battleships Rodney and Resolution, he transferred to destroyers, serving in four during the Second World War. His experiences are the subject of this book. He retired from the Navy in 1957 and emigrated to Canada. Eventually he became a teacher for 10 years in Vancouver.