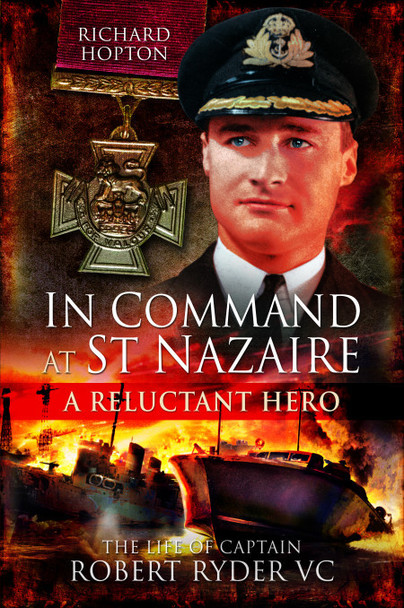 In Command at St Nazaire (A Reluctant Hero) (Paperback)

Add to Basket
Add to Wishlist
You'll be £14.99 closer to your next £10.00 credit when you purchase In Command at St Nazaire (A Reluctant Hero). What's this?
+£4.50 UK Delivery or free UK delivery if order is over £35
(click here for international delivery rates)

This is the first biography of Captain Robert Ryder V.C., Royal Navy (1908-1986), one of the greatest naval heroes of the Second World War. Ryder led the audacious raid on St Nazaire in March 1942 which completely destroyed the ports dry dock, depriving the Germans mighty pocket battleships of its use for the remainder of the war. The raid was one of the most brilliantly-executed combined operations of the war, much of the credit for which must go to Ryders outstanding planning and courageous leadership. He received one of five Victoria Crosses awarded for the operation.

Although Ryders name will be forever linked with the raid on St Nazaire, the rest of his war service was no less distinguished. Torpedoed in a Q ship in 1940 he was rescued after clinging to a piece of wreckage for four days. After St Nazaire, he was heavily involved in the planning of combined operations and took part in the ill-fated raid on Dieppe. On D Day he lead a naval assault party in the first wave of the invasion. For the rest of the war Ryder commanded a destroyer on the Arctic convoys.

Ryders naval career before the war was, as The Times put it on his death, unorthodox. In 1933-34 he, as captain, and four other young naval officers sailed the Tal-Mo-Shan, a 54 food ketch, from Hong Kong to England via the Panama Canal in a voyage lasting exactly a year, an outstanding achievement. Recently there has been press speculation that the voyage was a cover for naval espionage in Japanese waters. The Tal-Mo-Shan herself has now acquired international celebrity as a result of her sail-on part in the Abba film Mamma Mia. Between 1934 and 1937 Ryder served in the Antarctic as captain of the Penola, the base ship of the British Graham Lane Expedition. His formidable navigation and seamanship was largely responsible for the Penola, which was ill-adapted to polar conditions, surviving her ordeal intact. Ryder also took part in some of the earliest ocean yacht races, including the second Fastnet race in 1926.