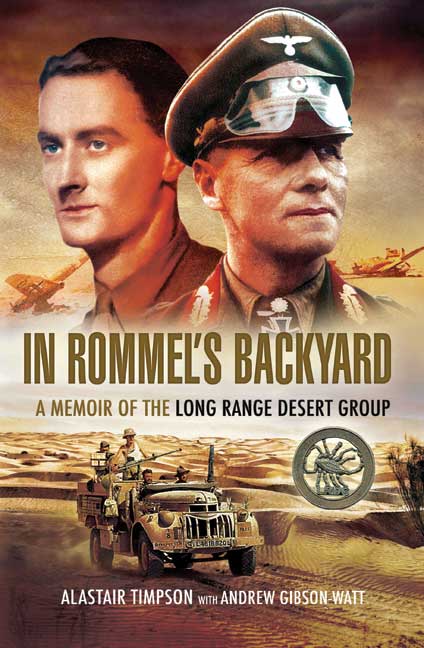 A Memoir of the Long Range Desert Group

Add to Basket
Add to Wishlist
You'll be £14.99 closer to your next £10.00 credit when you purchase In Rommel's Backyard. What's this?
+£4.50 UK Delivery or free UK delivery if order is over £35
(click here for international delivery rates)

Alastair Timpson belonged to that generation of young men who were propelled straight from public school into the maelstrom of the Second World War. Inured as they had become from quite an early age to discomfort, discipline, indifferent food and absence from home, many appeared to make an effortless transition from peace of their upbringing to the dangers of front line soldering.

Thompson had the good fortune to find this way, via the Scots Guards, into the Long Range Desert Group, the most romantic of special force units. In Rommel's Backyard describes the threefold roles of the LRDG, all of which involved daring, dash and incredible feats of endurance and navigation deep behind enemy lines. They were the eyes and ears of the Eighth Army, road-watching and reporting enemy movement; they destroyed enemy aircraft, supply dumps and vehicles; and transported other special forces and agents to their objectives.

Fortunately, Alastair Timpson kept a meticulous record of all his activities with the LRDG, although he never saw this as being of interest to more than his family. However, after his death, his son realised its wider appeal and offered it for publication. Although In Rommel's Backyard is a very personal account it epitomises the spirit of a campaign which involved many thousands of young men.

In a calm, often detached way - his modesty is noteworthy - the author gives an account of his and his colleagues' war behind enemy lines which will appeal not only to historians of the period but to all those who enjoy a real-life adventure story of epic encounters fought, and won, against the odds.

As featured in the Norwich Evening News.


The Book is written mainly in the first person with Andrew Gibson Watt acting as editor and commentator. Alistair Timpson was a member of the LRDG from the beginning to the end of the unit's history and the narrative mainly concerns the operations he was personally involved in. Timpson describes the times that the LRDG used Ford 4x4 trucks and then the replacement Chevrolets and captured vehicles and weapons. This is a superb addition to anyone's library and great reference to one of the pioneering unit of the Special Forces. Highly reccomended.

Though not as well known as that other special forces unit born of the North African campaign, the SAS, the Long Range Desert Group proved an invaluable source of intelligence on the movements of Rommel's Afrika Korps and its Italian allies between 1940 and 1943. Operating deep behind enemy lines, the men of the LRDG were experts in desert survival and navigation. Operating in small groups, they were the eyes of the Eighth Army, observing and reporting on enemy troop movements, attacking airfields and supply dumps, and transporting other special forces and agents through the vast expanses of the desert. Alastair Timpson served as second-in-command, and later as commander, of "G" Patrol, LRDG. His memoir is a fascinating and revealing account of the activities and exploits of one such unit; a story of courage, determination and endurance against the odds.

In Rommel's Backyard delineates the meticulously-kept record of the author's journey into the Long Range Desert Group, via the Scots Guard. Belonging to the era whereby young men, such as himself, were already acutely aware of unpleasantry and discomfort; and, in addition, having experience of regular absenteeism from their homes, the almost immediate transition from school to serving on the front lines was made quite effortlessly by the majority at this time. Timpson was indeed one of these, who despite the numerous daring and dangerous roles he took on e.g. reporting enemy advances, destroying their aircraft, and aiding special forces to accomplish their preconditioned goals; managed to infiltrate behind enemy lines. This real-life adventure is presented whole-heartedly, yet modestly, by its narrator; since, he never viewed the diary as being of anything out of the ordinary. His son, nevertheless, had the record brought to life after his death: a real treat for those interested in the history of the period, and an epic tale of adventures involving conflicts fought and triumphed.

In Rommel's Backyard describes the threefold roles of the LDRG, all of which involved daring, dash and incredible feats of endurance and navigation deep behind enemy lines. They were the eyes and ears of the Eighth Army, road-watching and reporting enemy movement; they destroyed enemy aircraft, supply dumps an vehicles; and transported other special forces and agents to their objectives.

What separates In Rommel's Backyard from other military books of its type is that this is one man's account of his own duties and experiences during World War II, and most notably, that it was written purely as personal memoir with no intent to publish almost adds an extra layer of integrity and gritty realism to this read. The piece has remained true to Alastair Timpson's original documents but the editor has attempted where necessary to respectfully mould the narrative into more digestible form for the reader. What results is a meticulous yet strangely emotionless account of the brave efforts of the Long Range Desert Group. Timpson's words, as group commander, are strictly a clinical record of his unit's experiences as they endured the deserts 'behind enemy lines', and his modesty in not letting his own emotions (of which there must have been plenty) interfere with the facts serves to pour cold realism on events often over-seasoned with drama and evocativeness. Indeed the style of these writings merely reflects the personality of the man; efficient. This is not to underestimate the brave efforts of the LRDG however; in the memoirs we are given fascinating insight into how Timpson and his men navigated grueling desert crossings and reported enemy movements whilst destroying enemy aircraft and vehicles for good measure. That the author just 'doesn't make a fuss about it' is testament to his character and his legacy is a real-life adventure for us all to enjoy.

Alastair Timpson belonged to that generation of young men who were propelled straight from public school into the dangers of WWII. He found his way into the Long Range Desert Group, a special force unit. They were the eyes and ears of the British Army, road-watching and reporting enemy movement; they destroyed enemy aircraft, supply dumps and vehicles, and transported other special forces and agents to their objects. His story involves daring, dash and incredible feats of endurance and navigation deep behind enemy lines.

Alastair Timpson was educated at Eton and Trinity College, Cambridge before gold-mining in South Africa. He was commissioned into the Scots Guards serving initially with the 5th Battalion. He was then posted to the posted to the 2nd Battalion in Egypt.

In Sept 1941 he was seconded to the LRDG and became the Commander of the Guards Patrol - has active career was ended after a severe wound at Monte Camino - he was awarded the MC and twice mentioned in despatches.

Andrew Gibson-Watt was Commissioned into the Welsh Guards in 1944, he saw active service in Italy, Austria and Palestine. Called to the Bar in 1952, he pursued a City career with Hambros Bank.

He has previously written the autobiographical An Undistinguished Life and a novel The Swoop of the Condor.