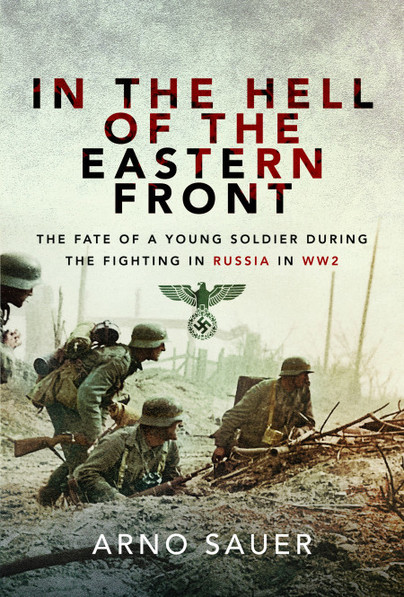 In the Hell of the Eastern Front (Kindle)

Click here for help on how to download our eBooks
Add to Basket
Add to Wishlist
You'll be £4.99 closer to your next £10.00 credit when you purchase In the Hell of the Eastern Front. What's this?
Need a currency converter? Check XE.com for live rates


The Hell that was the Eastern Front. The title couldn’t be more apt for this book!
Reading it, knowing it’s not a work of fiction really leaves its mark on you.
A powerful emotionally charged read that at times supersedes any work of fiction and makes you wish it was fiction and not a real life lived.
Certainly a book you won’t be able to forget and nor should it be forgotten.

A truly interesting story regarding the exploits of a German soldier in the Eastern front. The ordeal he had to endure throughout the war was horrifying. The hardships endured during this time will really make you think. This book will grab your attention and hold your interest.

This book by Sauer is one of the most interesting and believable accounts I have read of the trials of the many people involved in the War. Some of the details were new to me. To now that POWs worked and lived with German families helping in farms was surprising. The average German male was drafted and sent off. Well they needed help growing and harvesting so the POWs were set to do just that. The details of Arnos war experiences were true of every soldier in that war. What both sides went through was unimaginable and the story is a great reason for all to read what war is really like, not the glamourised tales of movies and posers, but the real details of horror . There were also stories of bravery and honesty as well as hope in this book. If you want to know what the IMO the average German soldier felt ,Their daily lives ,and what was going on back home .Then this book will open your eyes.

This book must be one of the most powerful anti-war books ever written. It tells the true story of a young rural, apprentice barber conscripted into the Wehrmacht and sent to fight on the Russian front. The experiences suffered by the young soldier were truly horrific, the author vividly captures the emotions and the bloody gore of infantry warfare.
I found the statistics of the number of dead and injured, unimaginable. How many millions of families grieved endlessly for their deceased loved ones? Most had no known graves.
The invasion of Russia by Germany was almost certainly doomed from the start due to the incompetence of Hitler and his henchmen. The opening of the second front, by the invasion of Normandy, put the destruction of Germany in no doubt.
I can thoroughly recommend this extraordinary biography, written by the protagonists son.

This book is remarkably well written. It is poignant and telling. I felt very bad for Fritz and his fellow soldiers who were only doing their job under penalty of death. War is terrible, no matter on whose side one fights.

In a time when veterans are all leaving us this is no small thing, and my advice is to read these beautiful memoirs thinking about how lucky we are not to have to live such experiences anymore.

This is a great little book that reveals the everyday and the horrors that can be seen in the war. The author has done a great job writing his story, it’s both informative and riveting to read. Certainly recommended.

This offering from Pen and Sword, is one of those excellent presentations that have come to the fore, in recent years. Telling the story of one man’s war in possibly one of the most brutal theatres of battle during World War II. I urge anyone who wants a sense of how close you can become to another human being in times of adversity to read this title.

It's not a long book, but it contains gripping details, especially as the war turned into a disaster for the Germans. A good read.