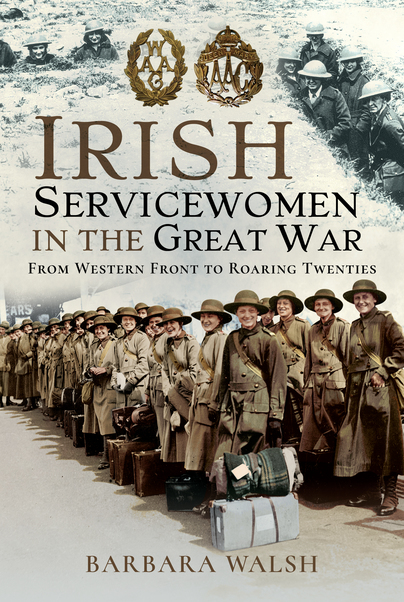 Add to Basket
Add to Wishlist
You'll be £19.99 closer to your next £10.00 credit when you purchase Irish Servicewomen in the Great War. What's this?
+£4.50 UK Delivery or free UK delivery if order is over £35
(click here for international delivery rates)

Newsletter of the 'Federation of Local History Society', Republic of Ireland - May 15th 2021

This is a truly remarkable and fascinating book, clear, precise, superbly illustrated, and with an easy to follow narrative.

A well-deserved tribute to an unrecognized collective whose performance was key during the course of the war.

All in all, a truly remarkable and fascinating book and highlighting a little known and overlooked essential role played by Irish women in the First World War.

This important and seminal study is to be warmly welcomed. It will encourage people to learn about their relatives who served in the WAAC and it will light the pathway into further historical and sociological analyses of different aspect of this neglected topic.

A new book that is a very welcome addition to military history on several levels. The story of Irish volunteers serving in the British forces during WWI is a much under-told story. Of Irish Servicewomen it is virtually untold – Most Highly Recommended

This is an absolute gem of a book. It covers a much neglected aspect of the Great War, and is researched and written by the very talented Barbara Walsh.

As an Irishman with a strong interest in the role of the Irish in the Great War, I obviously found it a fascinating book. But, it’s a very human story, very well-written, and one that deserves the widest possible audience.

I could see this book forming the basis for a very fine documentary. An enthralling and important book.

Article: ‘Local author tells story of Irish women in the First World War’ as featured by

This book is an excellent book written by the author Barbara Walsh and her research and depth of knowledge shines through to present a really good read... There is an excellent collection of notes and reference points throughout the book which further adds to the quality of the book, and especially for a book about women where information can be so hard to find. I recommend this book as a good quality read which I am happy to give 4 out of 5 stars.

Just when you though that there could not possibly be another book on an aspect of the Great War that had not already been covered, along comes 'Irish servicewomen in the Great War'. And what a great read it is.

The role of women in the Great War has always, inevitably, been overshadowed by the role of the men, and yet women played an important part. Just as Ireland send many men to fight with British Army regiments, so too did the women in Ireland also volunteer to serve, and this scholarly account examines their contribution to the Women's Army Auxiliary Corps from 1917.

The research for this book must have taken a long while, and there may have been - I am guessing here - a temptation to try and get this published whilst the First World War anniversaries were still happening. If that was the case, I am glad the author waited. Each chapter is accompanied by notes and the research resources have been well documented and cited. Appendices present additional useful material about specific individuals and locations and there are also some great photos.

This book owns a well-deserved place amongst the other regimental and unit histories that Pen & Sword publish so well.