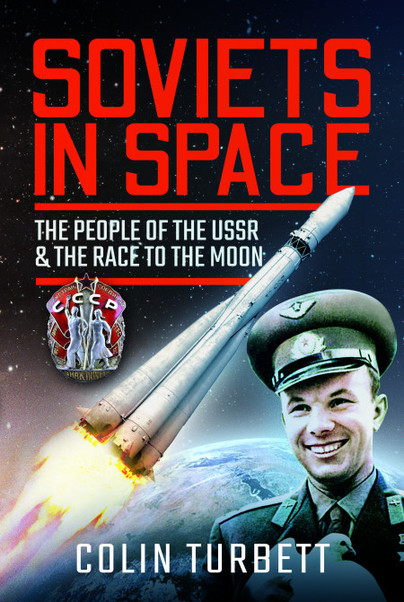 The People of the USSR and the Race to the Moon

Add to Basket
Add to Wishlist
You'll be £17.50 closer to your next £10.00 credit when you purchase Soviets in Space. What's this?
+£4.50 UK Delivery or free UK delivery if order is over £35
(click here for international delivery rates)

The victory over Nazi Germany in 1945, in which the Soviet Union played both the greatest part and suffered the greatest losses, found the country in a state of devastation. Military strength could not compensate for the damage wreaked by war, especially in the western areas of the USSR.

Within just over ten years, not only was Stalin dead and the relative freedoms of the Khrushchev 'Thaw' in progress, but the Soviet Union was ahead in the Space Race – beating the enormous wealth and resources of the USA, launching Soviet citizens from ordinary backgrounds quite literally into worlds beyond our own. The communist dream seemed alive and well.

The story of those years has rarely been told from a Soviet perspective: Cold War journalism and historical accounts written in the West tend to portray the space race in terms of ideological competition - with success and failure mirroring power and influence in a world divided between capitalism and communism. Whilst the military on both sides certainly benefited from the cutting edge technological advance of the space programmes, for the people of the USSR the prestige of their successes offered proof that 'real existing socialism' was moving mankind onto new levels of peaceful progress. Agriculture and railway building initiatives tried to involved ordinary people in other pioneering projects to build socialism before the dream shattered in the 1980s.

Extensively illustrated with images from the time, this book looks at the years of Soviet space success, their background, the personalities involved, and their impact on the ordinary people of the USSR.

Soviets in Space highlights the people of the USSR who turned the struggle of the post-war world into a communist dream and sense of pride . I am absolutely thrilled to see the Space Race from an alternate perspective and to get a closer look at those who sacrificed their live and health to make their country the first to reach the heavens.

This is far more than just a potted history of the Soviet side of the "Space Race". This book covers the politics and culture that were an integral part of the Soviet Union's desire (need?) to push boundaries. The accompanying photos gave an added depth to the text and I very much appreciated them. Fascinating and enjoyable.

Colin Turbett, in his book 'Soviets in Space: The People of the USSR and the Race to the Moon,' lifts a veil behind the Iron Curtain to give a closer look at what the Cold War and space race meant to the Soviet citizens. Using sources both in English and Russian, the author provides exciting details concerning everyday mundane life in the USSR: favorite Soviet movies, hobbies, difficulties in finding common consumer goods. Moreover, the book dissects the thinking of ordinary Soviet people to explain the differences between the communist and capitalist worldviews. The author puts the space race into the broader context of the Cold War and the war of ideologies to define why the USSR failed to catch up with the US after initial triumphs.

Along with the captivating story, the book contains a great set of pictures: posters, photographs, and drawings.

Very readable and interesting account of the Soviet space program, its strategic and technical goals and achievements, personalities and outcomes, and role within the wider Cold War rivalry. Plenty of intriguing details and prompts for 'what ifs' to be found here. Recommended for anyone with an interest in space exploration or the Cold War period in general.

I’ve only encountered the Russian program in bits and pieces (Two Sides of the Moon, Alexei Leonov’s memoir co-written with David Scott, being the only substantial Soviet account I’ve tried), so this is my first time encountering a lot of this content. I suspect, however, that even if I read other volumes focused on the Soviet space program, this one will stand out for its tone, which is as charitable but not blind to faults, and its welcome study of how the space program shaped Soviet culture, from consumer collectibles to music. My meeting the figures in the Soviet program — not just Gagarin and Koralev, but those who died, like Komarov — was long overdue, and I’m grateful to Turbetts for having provided this tribute to their memory.

This is solid coverage of the post-WWII events leading up to the Soviet space program. The author is knowledgeable and thorough, providing sympathetic coverage of the people and their country at the time. American readers may not be used to that approach, given the decades of propaganda about the USSR and Russia. The author doesn't accept all of their propaganda either, but does a good job placing it in context and showing how and why Soviet citizens were proud and excited about their accomplishments despite some of the political failings of their leaders. This may be written for a niche demographic but if that's you, I recommend reading the book.

In the introduction to his book, author Colin Turbett stresses that it is not a technical manual, rather an attempt to describe the political and social background to the space race and the part it played in the fall of the Soviet Union. It fulfils this aim admirably.
Turbett examines Russian culture and society from the start of the postwar era, on to the space program itself with detailed biographies of the leading players such as Yuri Gagarin and Valentina Tereshkova, through to the agricultural plan and right up to the collapse of the Soviet Union. “Soviets in Space” is meticulously researched and is one of the best books I have read on the subject.
Many contemporary images and photographs of cosmonauts and space memorabilia enhance the text. Fact-filled yet readable, this is a timely, much-needed book that celebrates the Russian space programme, and the Russian people, without bias.

A keen motorcyclist and social historian, Colin Turbett is the author of Motorcycles and Motorcycling in the USSR 1939-1990 (Veloce) and Playing with the Boys – Olga Kevelos Motorcycle Sportswoman. During his career as a social worker and frontline manager he had a number of academic papers published alongside two books: Rural Social Work Practice in Scotland (Venture Press 2010) and Doing Radical Social Work (Palgrave Macmillan 2014). He has long held an interest in the history of the Soviet Union and its people. This is his first book for Pen and Sword. 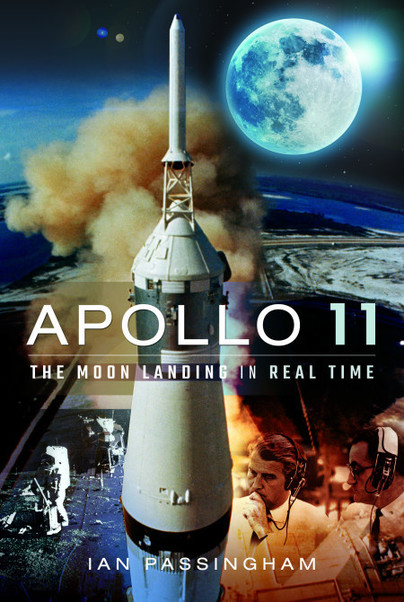 Half a century has passed since arguably the greatest feat of the twentieth century: when Neil Armstrong became the first man to walk on the Moon. Apollo 11: The Moon Landing In Real Time brings the mission back to life as never before in a thrilling day-by-day account, exploring everything from the historic flight itself to how the $24billion space programme divided a nation. Journey back in time and feel the excitement build in the days before launch and then experience the tension of the dramatic lunar landing and the relief of the crew’s safe return to Earth. This engaging account mixes…