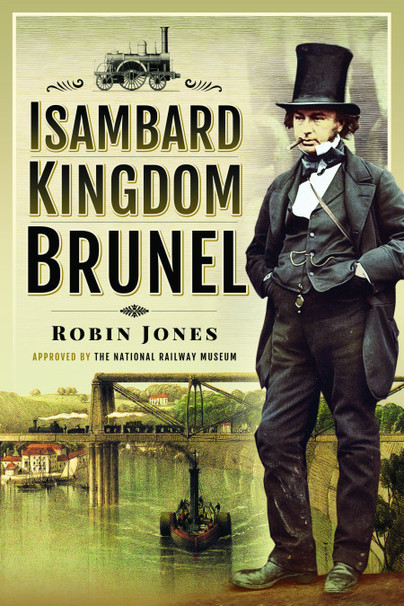 Add to Basket
Add to Wishlist
You'll be £15.29 closer to your next £10.00 credit when you purchase Isambard Kingdom Brunel. What's this?
+£4.50 UK Delivery or free UK delivery if order is over £40
(click here for international delivery rates)

Isambard Kingdom Brunel. Three names. Three people in one. Born in Portsmouth on 9 April 1806, there was Brunel the great engineer, who would habitually throw out the rule book of tradition and established practice, and start again with a blank sheet of paper, taking the technology of the day to its limits – and then going another mile.

Then there was Brunel the visionary, who knew that transport technology had the power to change the world, and that he had the ability to deliver those changes. Finally, there was Brunel the artist – who rarely saw technology as just functional, and strove to entwine the fruits of the Industrial Revolution with the elegance and grace of the neo-classical painter. His bridges, tunnels and railway infrastructure have entered a third century of regular use, and the beauty of their design and structure has rarely been equalled.

The three decades, from the 1830s to the 1850s, saw an explosion of technical excellence, and it was Brunel who in so many cases lit the blue touch paper. He did not always get it right first time, and it was left to others to reap the fruits of his many labours. Nevertheless, his actions fast-forwarded the march of progress by several decades.

Robin Jones’ writing style tells a complex story in way that is both easy to follow and a pleasure to read. Altogether it is a pleasing work, and recommended.

The book is extensively illustrated with period and modern-day illustrations, including technical drawings and fine art. The writing is fluid and engaging, easy on the technical minutia, and presents a nuanced picture of a complex person.

The book, incidentally, is approved by Britain’s National Railway Museum, one of the largest and richest collections of railway related material in the world. Royalties from the sale will help fund the NRM.