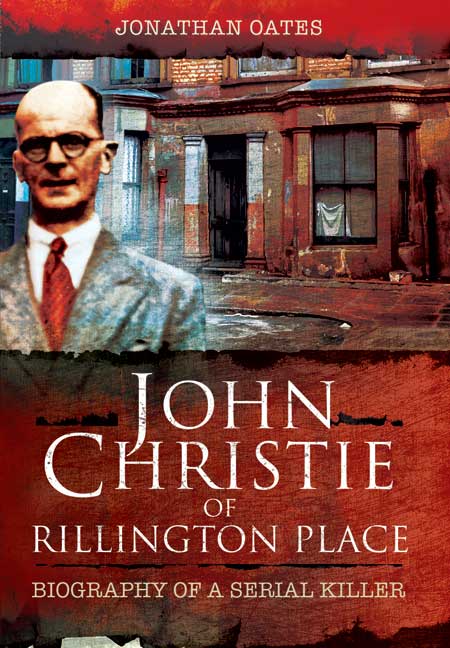 Biography of a Serial Killer

Now the subject of a three-part BBC One drama series: Rillington Place, as seen in The Sun

You'll be £12.99 closer to your next £10.00 credit when you purchase John Christie of Rillington Place. What's this?
+£4 UK Delivery or free UK delivery if order is over £30
(click here for international delivery rates)

Sixty years ago, the discovery of bodies at 10 Rillington Place in Notting Hill, London, led to one of the most sensational, shocking and controversial serial murder cases in British criminal history – the case of John Christie. Much has been written about the Christie killings and the fate of Timothy Evans who was executed for murders Christie later confessed to – the story still provokes strong feeling and speculation.

But most of the books on the case have been compiled without the benefit of all the sources that are open to researchers, and they tend to focus on Evans in an attempt to clear him of guilt. And many simply repeat what has been said before. Accounts neglect Christie's early life and crimes and the lives of his victims, and even witness statements about the Christies have been overlooked. So a painstaking, scholarly reassessment of the evidence – and of Christie's life – is overdue, and that is what Jonathan Oates provides in this gripping biography of a serial killer.

He relies on contemporary primary sources, files from the Home Office, the Metropolitan Police and the Public Prosecutor, as well as press and official reports. And he trawls through genealogical sources – electoral registers, the census, wills, military and police records and civil registration records. As a result, his account throws more light on the background, personalities and motivations of the key players in the drama – Christie, Evans, the victims and the courts.

In particular Jonathan Oates's reinvestigation seeks to present the widest possible range of facts relevant to the case. As he does so, he gives a compelling insight into Christie's life and how he was perceived before he was exposed as a serial killer.

I thought that this was a great book and it gave a great overview of John Christie and his crimes at 10 Rillington Place, a place made infamous due to his activities at the location.

I thought that the book was well researched and you could see the attention to detail that the author put in to the work. They had clearly done a lot of background work.

I thought it was an easy book to read and the later chapters for me were the most interesting. It has a great layout and flow with the chapters being broken down to keep the biography concise too.

The trial and execution of Timothy Evans who took the rap for one, if not two, of Christie’s crimes was one of the main catalysts for changing the legislation on capital punishments in the UK so that was an interesting angle in the book too.

It is 4 stars from me for this one, I thought it was a well written book, it had plenty of detail and even though the subject matter is not an easy in places I did enjoy the book and I thought it was a great true crime biography – highly recommended

As Ealing Borough Archivist and Local History Librarian, Jonathan Oates is in the perfect spot to poke into grisly crimes and murders. This reassessment uses police and Home Office files within a compelling insight into Christie's life and crimes.