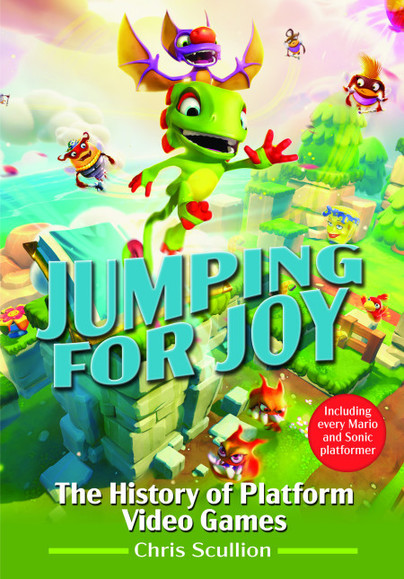 Jumping for Joy: The History of Platform Video Games (Hardback)

Including Every Mario and Sonic Platformer

Add to Basket
Add to Wishlist
You'll be £20.00 closer to your next £10.00 credit when you purchase Jumping for Joy: The History of Platform Video Games. What's this?
+£4.50 UK Delivery or free UK delivery if order is over £40
(click here for international delivery rates)

The platformer is one of the most well-loved video game genres ever, having entertained players for over 40 years. Jumping For Joy is a celebration of everything platform games have to offer, spanning their entire history. The first part of the book is a complete guide to every platform game starring Mario, Nintendo’s mascot and the most popular video game character of all time. With nearly 80 games featured in this section, it’s the definitive history of a true gaming hero. There are always two sides to every story, though, so the second part of the book focuses on every one of the 50+ platformers starring Sonic the Hedgehog, Mario’s former rival. After this it’s the book’s main course: a huge 100-page section detailing 50 other iconic and notable platform games covering the entire history of gaming, from the days of the Atari 2600 and ZX Spectrum all the way up to the Nintendo Switch, PS5 and Xbox Series X/S. Whether you’re a long-time veteran of platform gaming or a newcomer who wants to learn more about one of the most entertaining genres in video games, this is the perfect book for you. And there are some bad jokes in there too, if that’s your thing.