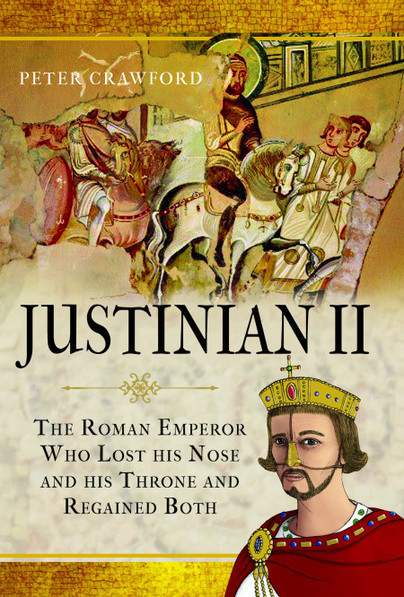 Add to Basket
Add to Wishlist
You'll be £30.00 closer to your next £10.00 credit when you purchase Justinian II. What's this?
+£4.50 UK Delivery or free UK delivery if order is over £35
(click here for international delivery rates)

Justinian II became Roman emperor at a time when the Empire was beset by external enemies. His forces gained success against the Arabs and Bulgars but his religious and social policies fuelled internal opposition which resulted in him being deposed and mutilated (his nose was cut off) in 695. After a decade in exile, during which he strangled two would-be assassins with his bare hands, he regained power through a coup d’etat with the backing of the erstwhile Bulgar enemy (an alliance sealed by the marriage of his daughter, Anastasia).

His second reign was seemingly harsher and again beset by both external and internal threats and dissension over doctrinal matters. An energetic and active ruler, his reign saw developments in various areas, including numismatics, administration, finance and architecture, but he was deposed a second time in 711 and beheaded. Drawing on all the available evidence and the most recent research, Peter Crawford makes a long-overdue re-assessment of Justinian’s colourful but troubled career and asks if he fully deserves his poor reputation.

: Also readily available for the personal reading lists of students, academia, and non-specialist general readers with an interest in the subject, "Justinian II: The Roman Emperor Who Lost his Nose and his Throne and Regained Both" is an exceptional, well written, exhaustively researched, and detailed biography that is very highly recommended for personal, community, college, and university library Ancient Roman Biography & History collections and supplemental curriculum studies lists.