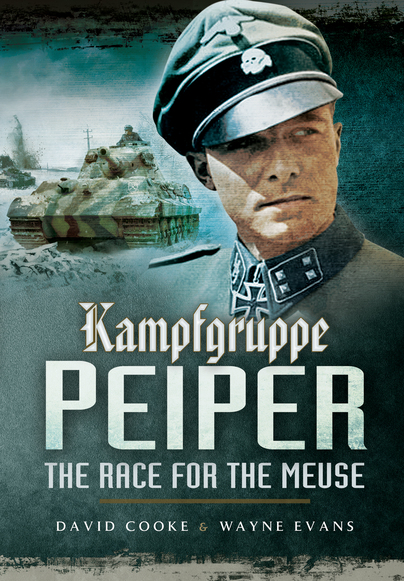 The Race for the Meuse

Add to Basket
Add to Wishlist
You'll be £14.99 closer to your next £10.00 credit when you purchase Kampfgruppe Peiper. What's this?
+£4.50 UK Delivery or free UK delivery if order is over £35
(click here for international delivery rates)

On 16 December 1944 Hitler's last great offensive commenced, pushing through the difficult terrain of the Ardennes in Belgium. Its objectives were the Meuse bridges and, beyond them, Antwerp. Hitler's aim was to cut off the northern British and American armies and force them to surrender or retreat.

At the forefront of the German assault was Kampfgruppe Peiper of the SS Leibstandarte Adolf Hitler Division. It was the most powerful force in the German order of battle. Travelling along roads hardly suitable for cars, let alone Tiger tanks, the kampfgruppe had to cross numerous streams and rivers to reach its objectives. It was delayed by a handful of American combat engineers who blew up bridges, then it was brought to a halt by American reinforcements. As the tide turned, the kampfgruppe fought for its life, holding out for several days in a desperate rearguard action against increasing odds.

David Cooke and Wayne Evans use contemporary accounts and a wealth of maps and illustrations to tell the story of Kampfgruppe Peiper in unprecedented detail.

In total, this well written volume makes fascinating reading. The superb text is accompanied by a full walking and driving battlefield tour, making this publication an invaluable addition to any military enthusiast’s library.