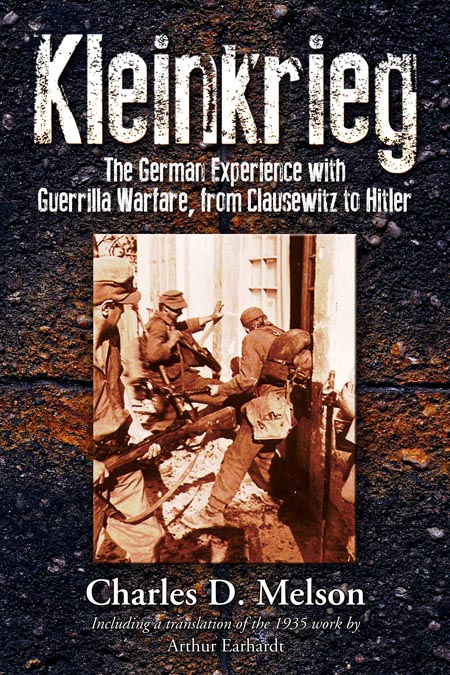 The German Experience with Guerrilla Warfare, from Clausewitz to Hitler

Add to Basket
Add to Wishlist
You'll be £25.00 closer to your next £10.00 credit when you purchase Kleinkrieg. What's this?
+£4.50 UK Delivery or free UK delivery if order is over £35
(click here for international delivery rates)

In recent years the great powers of the West—primarily the US and UK—have most often been relegated to fighting “small wars,” rather than the great confrontational battles for which they once prepared. It has been a difficult process, with some conflicts increasingly being seen as unwinnable, or at least not worth the effort in treasure and blood, even as the geopolitical structure of the world appears to slip. It is thus worth paying heed now, to the experiences of another power which once encountered the same problems.

This work examines the German analysis to the problem, covering their experiences from the Napoleonic era to the Third Reich. Though the latter regime, the most despicable in history, needed to be destroyed by US/UK conventional force, as well as that of the Soviets, the German military meantime provided analysis to the question of grassroots—as opposed to great-power—warfare.

This work is built around the historical analysis titled Kleinkrieg, provided to the German High Command by Arthur Earhardt in 1935 (republished in 1942 and 1943) which examined insurgencies from French-occupied Spain to recurrent problems in the Balkans. It also calls upon the Bandenbekampfung (Fighting the Guerilla Bands) document provided to Germany’s OKW in 1944. In both, conditions that were specific to broader military operations were separated from circumstances in occupation campaigns, and new background in the German experience in suppressing rebellion in World War II is presented.

Edited and annotated, along with new analysis, by Charles D. Melson, former Chief Historian for the U.S. Marine Corps, Kleinkrieg expands our knowledge of the Western experience in coping with insurgencies. Without partaking in ideological biases, this work examines the purely military problem as seen by professionals. While small wars are not new, how they should be fought by a modern industrial nation is still a question to be answered. Rediscovered and presented in English, these German thoughts on the issue are now made available to a new generation of guerilla and irregular war fighters in the West.


They are of great interest for any study of German anti-partisan tactics of the Second World War.

Charles D. Melson was the Chief Historian for the U.S. Marine Corps, at the Marine Corps University at Quantico, Virginia. Chuck also served as a joint historian with the U.S. Central Command and U.S. Special Operations Command. He was the author, co-author, or editor of several official publications and series. He was the recipient of the General Edwin Simmons-Henry Shaw Award for public historians and the General Leonard Chapman Medal. His education includes degrees in Liberal Arts from St. John’s College, Annapolis, and in History and Fine Arts from Sonoma State University, California. Chuck and his family currently live on Kent Island in Maryland.