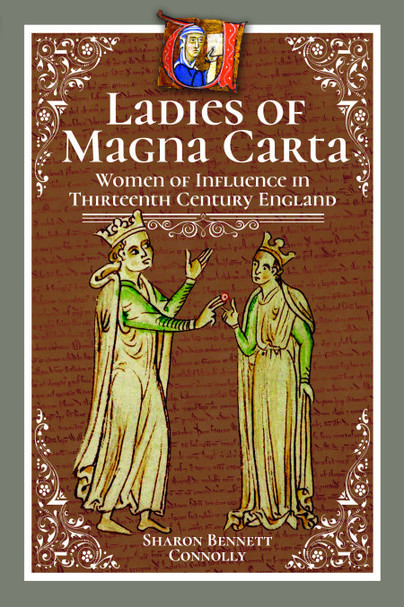 Preorder
You'll be £20.00 closer to your next £10.00 credit when you purchase Ladies of Magna Carta. What's this?
+£4 UK Delivery or free UK delivery if order is over £30
(click here for international delivery rates)

Magna Carta clause 39: No man shall be taken, imprisoned, outlawed, banished or in any way destroyed, nor will we proceed against or prosecute him, except by the lawful judgement of his peers or by the law of the land.

This clause in Magna Carta was in response to the appalling imprisonment and starvation of Matilda de Braose, the wife of one of King John’s barons. Matilda was not the only woman who influenced, or was influenced by, the 1215 Charter of Liberties, now known as Magna Carta. Women from many of the great families of England were affected by the far-reaching legacy of Magna Carta, from their experiences in the civil war and as hostages, to calling on its use to protect their property and rights as widows. Ladies of Magna Carta looks into the relationships – through marriage and blood – of the various noble families and how they were affected by the Barons’ Wars, Magna Carta and its aftermath; the bonds that were formed and those that were broken.

Including the royal families of England and Scotland, the Marshals, the Warennes, the Braoses and more, Ladies of Magna Carta focuses on the roles played by the women of the great families whose influences and experiences have reached far beyond the thirteenth century.

Sharon Bennett Connolly, has been fascinated by history her whole life. She has studied history academically and just for fun – and even worked as a tour guide at historical sites, including Conisbrough Castle. For Christmas 2014, her husband gave her a blog as a gift – www.historytheinterestingbits.com – and Sharon started researching and writing about the stories that have always fascinated. Ladies of Magna Carta is her third non-fiction book. Her first book, Heroines of the Medieval World, was published in September 2017 and the second, Silk and the Sword: The Women of the Norman Conquest, was released in 2018. Sharon gives talks on women's history and her TV work includes Australian television's Who Do You Think You Are?