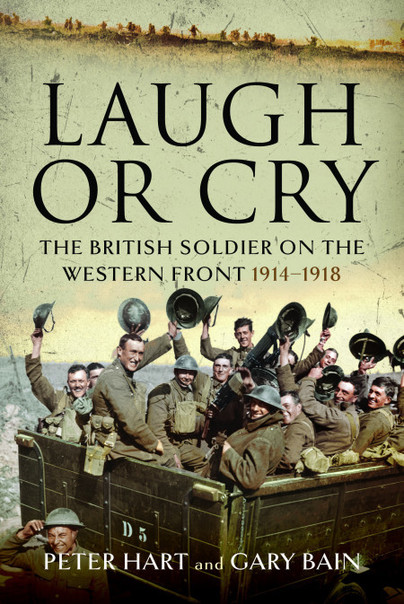 Preorder
Add to Wishlist
You'll be £20.00 closer to your next £10.00 credit when you purchase Laugh or Cry. What's this?
+£4.50 UK Delivery or free UK delivery if order is over £40
(click here for international delivery rates)

'Awakened by great shouted oaths below. Peeped over the side of the manger and saw a Belgian lass milking and addressing a cow with a comprehensive luridness that left no doubt in my mind that British soldiers had been billeted here before.' Private Norman Ellison, 1/6th King’s Liverpool Regiment

Humour helped the British soldier survive the terrible experiences they faced in the trenches of the Western Front during the Great War. Human beings are complicated, and there is no set pattern as to how they react to the outrageous stresses of war. But humour, often dark and representative of the horrors around them could and often did help. They may have been up to their knees in mud and blood, soaking wet and shot at from all sides, but many were still determined to see the ‘funny side’, rather than surrender to utter misery. Peter Hart and Gary Bain have delved deep into the archives to find examples of the soldier’s wit. The results are at times hilarious but rooted in tragedy. You have to laugh or cry.

Gary Bain joined the Junior Leaders and served in the Royal Army Ordnance Corps working with the Intelligence Corps before leaving the army and rising in civilian life to be Head of Commercial at Transport for London.

Peter Hart was the oral Historian at the IWM Sound Archive for almost 40 years where he was responsible for interviewing veterans. He has written several books on both World Wars. He has appeared in numerous television documentaries and is an experienced tour guide.