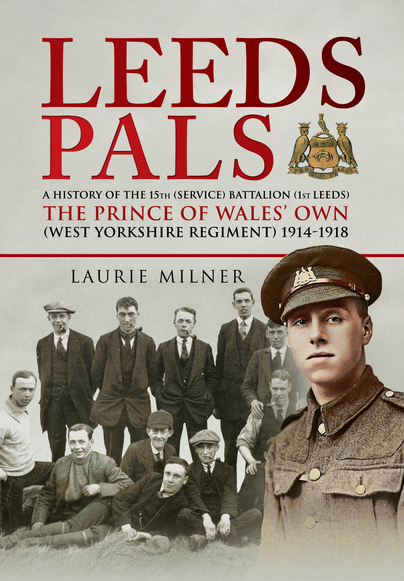 Add to Basket
Add to Wishlist
You'll be £22.50 closer to your next £10.00 credit when you purchase Leeds Pals. What's this?
+£4.50 UK Delivery or free UK delivery if order is over £35
(click here for international delivery rates)

'It is a story which traces, in great and fascinating detail, the raising and training of the battalion in and around Leeds, their service in Egypt before being sent to France in December 1915 right up to the German offensives of March and April 1918.'

Laurie Milner was a senior historian at the Imperial War Museum, and has been instrumental in creating military museums abroad. In addition he has led battlefield tours for the Imperial War Museum and for units of the British Army. Therefore, he is well qualified to write a book on one of the 'Pals' Regiments.
The amount of research undertaken is vast, and Milner has used this superb material to provide a narrative of great relevance. I thoroughly enjoyed this book, especially for its human content making it easily readable. It is a book you could easily dip into and read a chapter at a time, as each chapter describes an aspect of the battalion's story.

This superb book was first published in 1991 in the then large format ‘Pals’ series by the Barnsley Chronicle. This new edition is a substantial hardback but still retains the profusion of excellent illustrations as well as a sound, and easily readable text. There are also useful appendices with a nominal roll, casualty lists, names of those taken prisoner and information on gallantry awards. As such it will be of great interest to family historians as well as those fascinated by the story of the Pals in the Great War.

Laurie Milner’s book is a classic account of the men from Yorkshire whose war was two years in the making and ten minutes in the destruction at Serre on that terrible day in 1916, and it also gives us a wider understanding of how a battalion formed like this managed to sustain the whole war. Highly recommended.