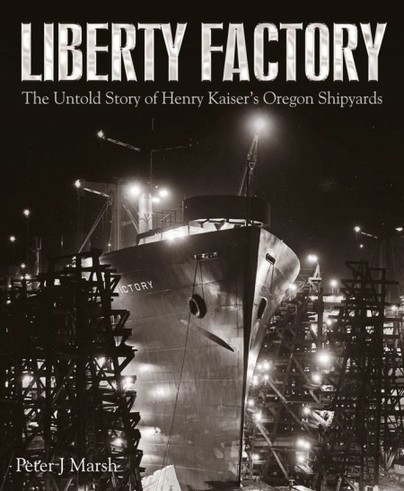 Add to Basket
Add to Wishlist
You'll be £35.00 closer to your next £10.00 credit when you purchase Liberty Factory. What's this?
+£4.50 UK Delivery or free UK delivery if order is over £35
(click here for international delivery rates)

This is an important book, readable and well-illustrated, which highlights a crucial part of the industrial battle during the war. It is a fitting tribute to the energy and skill of the men and women who built many of the ships on which the Allies depended.

This is an excellent study of these long disappeared shipyards and the world that they briefly created, and a reminder of how much hard work went into the American industrial ‘miracles’ of the Second World War.

A curious and very interesting book for those lovers of naval history of all times.

A good-quality worthwhile tome, well-illustrated on quality paper, and quite apparently a labour of love by the author. Can't say fairer, really.

Liberty Factory is a nicely illustrated large-format book that will appeal to readers interested in wartime shipbuilding and local history, particularly on the west coast of the United States and in Oregon. Seaforth has done a very fine job on lay-out and the black-and-white photographs that grace the pages. For that reason alone, it is well worth the cover price.

The mostly original material has been well presented, and the photos, especially the impressive two page spreads.

Liberty Factory is a fascinating industrial history, one as much about people as ships. It offers an absorbing look at Home Front America during World War II, and perfectly captures mid-twentieth-century America. Anyone interested in World War II shipbuilding and ships will enjoy it.

Brilliantly researched and illustrated book. It is both great maritime history and a business inspiration.

I discovered so much in this book, a story I really know essentially nothing about beforehand. Apparently there is little left in Portland these days to commemorate the important role the city played in the Liberty ship programme of WW2, and I think this book should go a long way in doing something to make more of a mark of the story. The social aspects of the revolutionary approach of the Kaiser companies should really be applauded. Highly recommended.

"I highly recommend this book."

It is good to have this book, especially for the photographs which are, as always, worth many words. It is clearly written and well edited.

Liberty Factory is most highly recommended.

Strange to think of an enormoous shipyard in Oregon, then, and it takes Peter Marsh to walk me through it. Fascinating.

A hidden bit of American maritime history brought to light for the first time. Unique!

As a military and maritime correspondent for many years, I spent time with Peter Marsh while living in the Pacific North West and suggested that since this was home turf, he should look at possibly doing a book on ships that emerged during World War Two from Portland, Washington State's Vancouver as well as Astoria at the mouth of the Columbia River.
It took him five years but a remarkable work has emerged from British publishers Seaforth (a Pen & Sword subsidiary).
The book is one of the best and most comprehensively illustrated I've seen and is a tribute to that remarkable period when the United States lifted itself up from its bootstraps and set about creating the wherewithal needed to defeat Japan. Neither Berlin nor Tokyo believed that the Yanks had it in them: surprise, surprise!
There is something of a lesson here for China which seems to heading the same path almost a century after Japan tried its luck. When the chips are down, as displayed by Marsh, the Americans - despite all the differences on the planet - end up pulling together. My goodness, what a fine job they did with Liberty (and thereafter, Victory) ships.
All the kudos go to Peter Marsh. Hopefully he will come up up with a follow-up volume.

PETER MARSH was born in Greenwich, right at the heart of Britain’s maritime heritage, and was soon smitten with a love of small boats and sailing. For a while he combined a career in teaching with time spent boat-building, offshore racing and voyaging under sail, but a chance visit to the United States convinced him to sell his boat and emigrate. After travelling widely, he eventually settled in Portland and returned to a sailing life, exploring large parts of the Pacific Northwest in a boat he built himself. These adventures gave him the raw material for articles in regional boating magazines, his first published works. Success in this field led him into a career as a freelance journalist and he widened his scope to cover all aspects of local maritime interest from fishing to commercial shipping.

In the course of this work he became friends with Larry Barber, the retired marine editor of the local newspaper, The Oregonian, and on Barber’s death in 1996 he inherited his substantial archive of papers and photographs. It took some time to realise the value of what he had been given, but a visit to the D-Day beaches in Normandy led him to look more closely at Barber’s wartime material. Slowly it became evident that the diaries and pictures recorded in unique detail the largely overlooked story of Oregon’s massive contribution to the World War II shipbuilding effort. Peter has spent the last five years sorting, collating and editing the material, while also researching the background, and this book is the result.