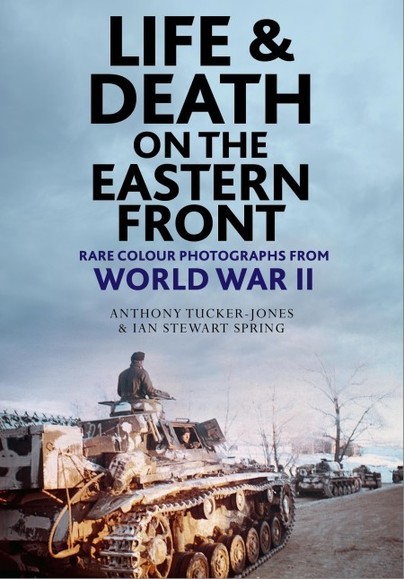 Life and Death on the Eastern Front (Hardback)

Add to Basket
Add to Wishlist
You'll be £20.00 closer to your next £10.00 credit when you purchase Life and Death on the Eastern Front. What's this?
+£4.50 UK Delivery or free UK delivery if order is over £35
(click here for international delivery rates)

This incredible visual record of life and death along the Eastern Front draws from the PIXPAST Archive, a collection built by Ian Spring of more than 32,000 original colour photographs taken between 1936 and 1946. Collated into three parts and organised thematically, the book begins with images of the ground war, including Hitler’s invasion of the Soviet Union and the tanks, vehicles, weaponry and infantry on both sides. Moving into the war in the skies, the images depict aircraft in flight and on the ground, the bombers, fighters, Luftwaffe personnel and the destruction wrought from battle. And finally, the images take us behind the lines, to the prisoners of war, partisans, medics, the daily lives and leisure activities of soldiers and civilians along the front and the impact of the harsh Russian winter.

With 250 photographs and text by renowned author and commentator Anthony Tucker-Jones, these images offer a rare, often surprising insight into the realities of the Second World War and people caught up in it, in vivid colour detail.

Anthony Tucker-Jones and Ian Stewart Spring have gathered a fine and disturbing collection of pictures. Pen and Sword have published a large number of books from the Eastern Front, but they are all in black and white. Now they publish the book in rare colour pictures from the time, these have not been coloured recently, from the very early colour film.

This book has been collated into three sections, starting with the invasion and the ground war, then the war from the skies, and finally behind the lines with the captured Prisoners, to the daily lives who were living under the Nazi yolk.

The colour pictures help to drive home the nature of the eastern front and how it could be cold, wet, and frozen in winter. While in winter it could be hot, and sometimes felt like there was nowhere to hide for soldiers. Staff cars covered in layers of mud almost all the panzer grey was covered.

There are plenty of pictures of German army and some of the redeployed armaments captured in France. An example such as the two-man French Chenillette d’Infanterie, which looks more like a toy than a killing machine, on a double page.

A great book and an interesting addition to any collection on the Easter Front.

"A really excellent resource if you are interested at all in the Eastern Front!"

I found this a fascinating and well researched, and informative book, for any one with an interest in this period of the war, modellers, or historians and writers, this is a must have book, that will cause you to sit back and take your time exploring its 286 pages many with 2 to 3 plates per page, and be stunned by the details and depth of image shown here.

With an authoritative text from Anthony Tucker-Jones this volume presents many different aspects of the German war in the east, mainly from 1941 and 1942. Very good quality reproductions can be found in the hard back edition, few of which I had seen before. Will be a ‘must have’ for students of the Eastern Front as well as of interest to many others.

A very good historical read on this turbulent time in history. You can feel the agony and pain of the soldiers fighting and experience the sad loss of young life at this time. I would recommend this book to anyone who likes a good historical read. Well researched book.

I probably have three main things to say about this book. 1. It’s amazing how eerie it feels looking at photographs you’re used to seeing in black and white. The colour makes some of the pictures really pop, but find some of the pictures feel very real, especially with recent news events featuring Russia going to war with Ukraine. 2. The number of vehicles or weaponry that seemed to need repairing, showing how the long-distance having to be travelled, and the toll on having a war over such a large area in often harsh conditions. Finally, what a fantastic array of photographs of such good quality, a really excellent book.

A selection of just some from the huge collection of more than 32,000 colour images in the PIXPAST collection, this is the finest collection of original WW2 colour images I think I have ever see in one book, and not modern colorized versions of old B&W photos. Historians and modellers will like these for showing the real colours of the war on the Eastern Front, from the early days of 1941 through to the later years. Highly recommended.

I love war nonfiction, its my favorite genre. When I saw this book I was instantly ready to put down my other books to dive into this one. The color photographs are stunning, showing all aspects of the operation. Besides showcasing the rare photos, I most enjoyed the biographical portion about the photographer. I enjoyed knowing the story of the Nazi solider who spend his time wielding a camera, taking photos for morale, national pride, and documentation of the offensive.

I researched into Tucker-Jones other works and I am looking forward to tucking in to his other books.

Those of us that are only familiar with the black and white photos in most books about the Second World War will be shocked to realize that color photography was readily available in Nazi Germany before the start of the war. In “Life and Death on the Eastern Front: Rare Colour Photographs From World War II” Ian Spring and Anthony Tucker-Jones collect these photographs from both official propaganda sources as well as personal photos taken by the soldiers themselves.

These are almost exclusively photos from the German side. The authors group the photos by theme, focusing on the equipment (both on land and in the air), the people (soldiers, POWs, and even civilians), and scenes behind the lines. We see the effects of the war, from burning buildings to destroyed tanks, but also we see the soldiers as human beings, enjoying downtime, shaving, lying in the sun. And finally we see the weather taking a toll, from choking dusk to axle-deep mud to the dreaded Russian winter.

There is not enough one can say about the photos – they are absolutely spectacular. One forgets what a difference color makes when looking at those scenes from long ago – the soldiers, the scenery comes alive. One can abhor the Nazis and all that they stood for but feel some sympathy for the young men thrust into the deadly situation that would claim many of their lives. We see what the day-to-day lives at the front lines (and behind those lines) was like for the common soldier.

This is a real photographic memory and story to go with it. The pictures arent staged nor are they sparing of sadness for both sides. The amazing part of this book for me was seeing the Russian prisoners fighting against the Russians in some photos. The destruction in these photos made me realize how foolish war is and the cost of it is unimaginable . Excellent look at the Eastern Front focusing on the early war years.

I have read many books about the Eastern Front, but I can honestly say that this ranks among the best in the genre. The authors have brought together and professionally collated, many previously unpublished rare coloured photographs of the long & bitter campaign in Russia.
The quality of the photographs is quite outstanding, especially when one considers the dreadful climatic conditions that the photographers, cameras, and films had to endure. Each photo has been carefully researched, with the authors identifying the equipment and, where possible, the approximate location where it was taken.
The photographs reconfirm the vast range of disparate vehicles the Germans had at their disposal. It must have been a logistical nightmare to source the spare parts - particularly as most of the available vehicles were totally unsuitable for the conditions experienced on the Eastern Front. Having personally experienced life in the Steppes, I can confirm that the Winters are truly dreadful. However, the Summers can be even worse! Clouds of penetrating dust, flies, midges, and insufferable heat! I cannot imagine how awful it must have been to fight and live in these conditions against a vast unstoppable enemy.
There are many more thousands of unpublished photographs in the author's archives, I cannot wait for the other photographs to be published in the future!

A interesting photographic look at the war on the eastern front during WW2. The pictures both professional and amateur provide an interesting look at both the equipment and personal sides of the war. The photos are clear, and provide little known glimpses into the war. The author does an excellent job of providing a good narrative to explain each section of the book to give a great background for the photos.

Anthony Tucker-Jones and Ian Spring’s gorgeous book is a meticulously researched and arresting visual history of life on the Eastern Front of World War II, featuring an archive of colour photographs which provide an unprecedented insight into everyday wartime life.
The book begins with biographical detail of the various official (and unofficial) German and Russian photographers who took the photos at the time. Most of the photographs were taken using film made by the then up and coming manufacturer Agfa, which became widely popular both during and after the war. The shots have an honest, imperfect charm due to the limitations of the film.
Ian Spring’s stunning collection of over 30,000 colour photographs taken by Germans on the Eastern Front forms the backbone of this excellent book. The photos have a moving realism to them as they are naturally-posed records of the soldiers’ war experiences. Many of them are lighthearted with German soldiers posing and smiling for the camera, while others are incredibly poignant. There are even some shots of Hitler himself visiting the battlefield to the delight of the troops.
The book is split into three parts, exploring the conflict on the ground, in the air and behind the lines. Anthony Tucker-Jones’ captions are full and detailed with a huge amount of technical information about armoured vehicles, fighter planes and weapons to satisfy the enthusiast.
This is a beautifully produced book which is highly recommended for anyone interested in the history of WWII at a human level.

A stunning collection of colour images and if the subject can be beautiful, this book certainly is. All of the ‘graininess’ of front line soldiery is there and it offers an intensity not often seen in black and white images.

Developing a fascination with historical imagery from a young age, Dublin-born Ian Spring began collecting colour photo slides of the war from all over the world. Determined to preserve these historical moments for the future of mankind, he created the PIXPAST Archive to digitize and share this extraordinary collection. Thought to be the world's largest collection of World War II colour photography, the archive has supported historical research and contributed to more than 50 publications.