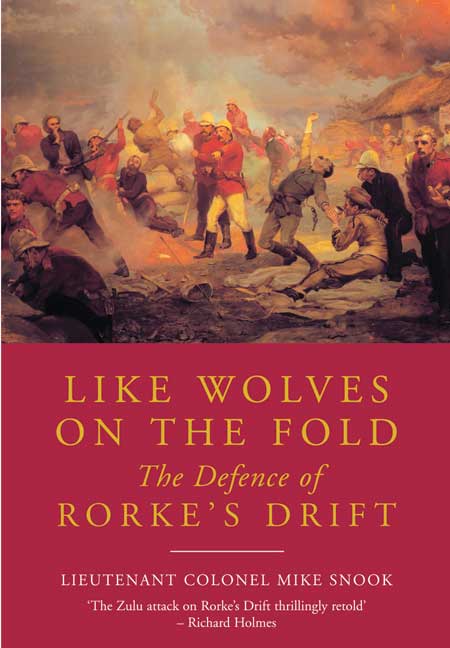 The Defence of Rorke's Drift

Add to Basket
Add to Wishlist
You'll be £16.99 closer to your next £10.00 credit when you purchase Like Wolves on the Fold. What's this?
+£4.50 UK Delivery or free UK delivery if order is over £40
(click here for international delivery rates)

Wednesday 22 January 1879 was one of the most dramatic days in the annals of military history. In the morning, a modern British army was swept aside by the onset of a seemingly unstoppable host at Isandlwana. Nearby, at a remote border outpost on the Buffalo River, a single company of the 24th Regiment and a few dozen recuperating hospital patients were passing another hot, monotonous day. News of the disaster across the river came like a bolt from the blue. Retreat was not an option. It seemed certain that the Rorke's Drift detachment would share the terrible fate of their comrades.

Colonel Snook brings the insights of a military professional to bear in this strikingly original account. It is an extraordinary tale – a victory largely achieved by the sheer bloody-mindedness in adversity of the British infantryman, fighting at the remarkable odds of over thirty to one. The heroics of all eleven VC winners are recounted in detail, and we are offered new insights into how the Zulu attack unfolded and how 150 men achieved their improbable victory. The author describes the remainder of the war, from the recovery of the lost Queen's Colour of the 24th to the climactic charge of the 17th Lancers at Ulundi. We return to Isandlwana to consider culpability, and learn of the often tragic fates of many of the war's participants.

Like Wolves on the Fold is outstanding. You can tell that Snook put a lot of time and effor into researching and writing this masterpiece of historical writing. He weaves into his research the logic of a military commander...This book is an excellent example of scholarship and easy-to-read history."

Written by a serving officer of the Royal Regiment of Wales, formerly the 24th, Like Wolves on the Fold is the fascinating true story of one of the most improbable victories in military history ... A collection of inset photographs and artwork, most in black and white but a few in color, round out this rousing military history, which pays full respect to both sides in a bloody conflict.

This is a remarkable work, and the author's unbridled respect for the fighting qualities of the British soldier and his abiding affection for the Zulu people shines through.

Snook describes the events in a manner that is readable and enjoyable. He keeps the story short, yet follows the actions of as many of the specific individuals as extant records make possible...Perhaps the best feature of Wolves on the Fold is that the reader has the sense of being told the exciting story of courage and tenacity backing military training and decision-making, as if in conversation...for a story that has been told many times, by many fine writers, Colonel Snook succeeds in making his version both entertaining and educational...the sheer volume of information regarding the men who participated in the struggle both at Rorke's Drift and Isandlwana is invaluable and reason enough to add the book to one's collection.

I really enjoyed this book ... Very few battles have the desperation, excitement and intensity of Rorke's Drift and this book does the battle justice.  I highly recommend this book.

Although the legendary defense of Rorke’s Drift has certainly been documented before, Snook’s second book is a brilliant historical achievement. From the beginning his narrative leaps from each page to the next, making the reader feel as if he is sometimes standing alongside Lieutenants John Chard and Gonville Bromhead. Even so, when objectively read, the book clearly gives equal recognition to the martial courage of the defending British soldiers and attacking Zulu warriors alike…Like Wolves on the Fold is a highly recommended addition to the Zulu War enthusiast’s library. It is a very well documented and outstandingly written saga of what may well be considered a Thermopylae of the British Army.

The story of Rorke's Drift is well documenented, and Snook adds primarily "a soldier's perspective," recreating the battle in scrupulous detail and high drama.