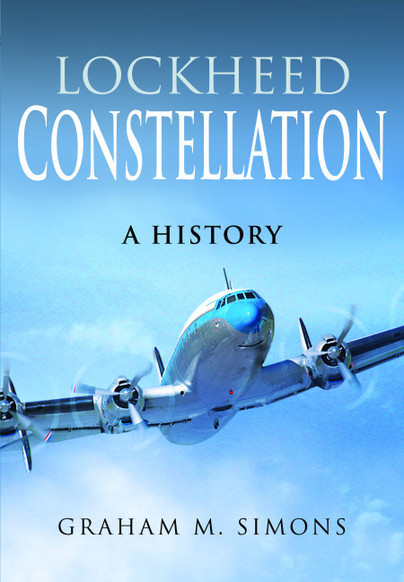 Add to Basket
Add to Wishlist
You'll be £30.00 closer to your next £10.00 credit when you purchase Lockheed Constellation. What's this?
+£4.50 UK Delivery or free UK delivery if order is over £35
(click here for international delivery rates)

Clarence ‘Kelly’ Johnson’s design for the Lockheed Constellation, known affectionately as the 'Connie', produced one of the world’s most iconic airliners.

Lockheed had been working on the L-044 Excalibur, a four-engine, pressurised airliner, since 1937. In 1939, Trans World Airlines, at the instigation of major stockholder Howard Hughes, requested a 40-passenger transcontinental aircraft with a range of 3,500 miles, well beyond the capabilities of the Excalibur design. TWA’s requirements led to the L-049 Constellation, designed by Lockheed engineers including Kelly Johnson and Hall Hibbard.

Between 1943 and 1958, Lockheed built 856 Constellations in numerous models at its Burbank, California, factory – all with the same distinctive and immediately recognisable triple-tail design and dolphin-shaped fuselage.

The Constellation was used as a civil airliner and as a military and civilian air transport, seeing service in the Berlin and the Biafran airlifts. Three of them served as the presidential aircraft for Dwight D. Eisenhower. After the Second World War, TWA’s trans-Atlantic service began on 6 February 1946 with a New York-Paris flight in a Constellation. Then, on 17 June 1947, Pan Am opened the first-ever scheduled round-the-world service with their L-749 Clipper America.

In this revealing insight into the Lockheed Constellation, the renowned aviation historian Graham M. Simons examines its design, development and service, both military and civil. In doing so, he reveals the story of a design which, as the first pressurised airliner in widespread use, helped to usher in affordable and comfortable air travel around the world.


"Simons makes good use of black-and-white and color photographs of Constellations in various airline markings and includes colorful airline brochures and marketing posters featuring the aircraft."

"Graham M. Simons recounts the unusual and sometimes dramatic development and operational career of one of the 20th century’s most iconic airliners."

"The post-war civilian airplane receives a thorough and well-written examination of its technical details, numerous upgrades and variations, and airline history."

The Lockheed Constellation was an elegant airliner that grew from pre-war work to design and develop a four engine airliner with pressurized cabin and trans Atlantic range. At a time of conversion of bomber designs, the Connie was a stylish civil airliner that was also to be employed in military roles – Very Highly Recommended

The book is heavily illustrated by both black & white and colour photographs and plenty of diagrams. These are often rare and unseen and will delight propliner fans... a fascinating story of an amazing aircraft.