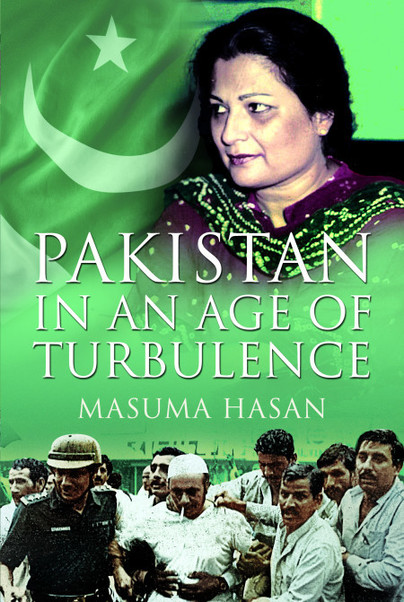 Pakistan in an Age of Turbulence (Hardback)

Add to Basket
Add to Wishlist
You'll be £20.00 closer to your next £10.00 credit when you purchase Pakistan in an Age of Turbulence. What's this?
+£4.50 UK Delivery or free UK delivery if order is over £35
(click here for international delivery rates)

A detailed and graphic personal and family history within a national and international context. It mirrors and brings to life the modern and contemporary history of the Indian sub-continent and of India and Pakistan, and the dramatic birth-struggles of both major nation states dominating South Asia. And the complex racial, religious and ethnic mix was central to turbulent politics and Islamic identity is a factor in international politics. The overshadowing influence of the British Indian Empire was a constant factor and sets the context. The huge upheaval and tragedy of Partition is at the heart of the story with the flight of an influential Muslim population, advanced in education and culture and prominent in the professions, to Pakistan to form a new state, liberal in form but Islamic in confession. Here is a vivid and attractive personal family life followed by distinguished state service, laying bare the modern political history of Pakistan from the inside with sharp and decisive insight, including the promise and tragedy of the Bhutto era, the excesses and cruel extremism of the Ziaul Haq regime, and the struggle of the return to democracy in Pakistan.

Masuma Hasan is a scholar, former diplomat and top-level civil servant, on the international stage and in Pakistan. Her family goes back to the Muslim aristocracy in India in the 13th century but like many members of leading Muslim families, they went to Pakistan at Partition. She was the first Pakistani woman to obtain a PhD at Cambridge in Economics and Politics. Masuma Hasan’s husband, Fatehyab Ali Khan, played a leading role in the politics of Pakistan and as a woman in a patriarchal society, she rose to top positions in governance and international diplomacy. At the peak of her career, she became Pakistan’s Permanent Representative at the United Nations in Vienna, representing her country at all international agencies, including the International Atomic Energy Agency. She was elected Chair of the Group of 77 and China at the UN in Vienna, was Ambassador to Austria, Slovenia and Slovakia, and ultimately the Cabinet Secretary of Pakistan. She is Chairperson of The Pakistan Institute of International Affairs, her country’s oldest think tank, and President of Aurat Foundation, a leading women’s empowerment organization.