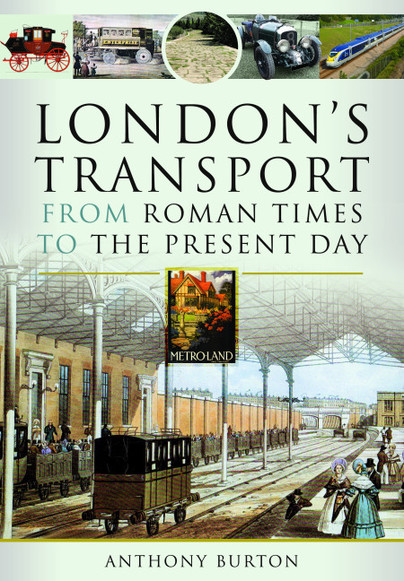 London's Transport From Roman Times to the Present Day (Hardback)

Preorder
Add to Wishlist
You'll be £17.50 closer to your next £10.00 credit when you purchase London's Transport From Roman Times to the Present Day. What's this?
+£4.50 UK Delivery or free UK delivery if order is over £35
(click here for international delivery rates)

Transport systems are the lifeblood of all great cities and this is certainly true of London. As far back as Roman times, their city Londinium was the hub of a network of roads leading out to all the major centres of the time. It was the Romans who gave the city its first bridge across the Thames and its first paved roadways. This book tells the story of London’s roads and bridges and the vehicles that used them. For centuries, transport meant horse drawn vehicles, from lumbering waggons to elegant carriages and the city had a flourishing industry, building carriages. The Industrial Revolution brought major changes, not least in the construction of more and more bridges over the Thames. In the 19th century a new system appeared with the arrival of the railways, and the many stations that are such prominent features of the cityscape. The story continues into the 20th century, when, for a time, the city was also home to some pioneering motor car manufacturers, such as Vauxhall. It comes nearer our time with the construction of the underground railway and the driverless trains of the Dockland Light Railway. Londoners will have a chance to find out just how travel around the city has changed in the last two thousand years.

I was expecting this book to be more academic, but I was pleasantly surprised at how captivating this book was. It's very well written and I think anyone with an interest in history would enjoy this book.

A unique book. I enjoy reading about British history, particularly about the royals and about the capital city, London. Hence me choosing to reading the history of transportation in London. Starting from ancient Roman roads and continuing to present-day hybrid & electric vehicles, Anthony Burton does a wonderful of presenting how transportation has evolved in London. I particularly enjoyed reading about the 'birth' of luxury car leaders such as Daimler and Benz and Bentley. If the men who started these cars could see how far they have come, they would be amazed and proud. It's a good book to read if you're an Anglophile or a history buff in general. You will definitely learn a lot.

I thought this might be a bit dry and academic but not so. It was a really interesting and complete record of transport across our fair capital. My husband (after I kept reading him bits I thought he might be interested in), decided to read it after me, and he only reads a very limited range on his favourite subjects. Needless to say that it is keeping him very quiet, thank you Mr. Anthony Burton.

Absolutely fascinating book, well written and really useful in understanding how transport has changed.
Beautiful composed and well worth reading.