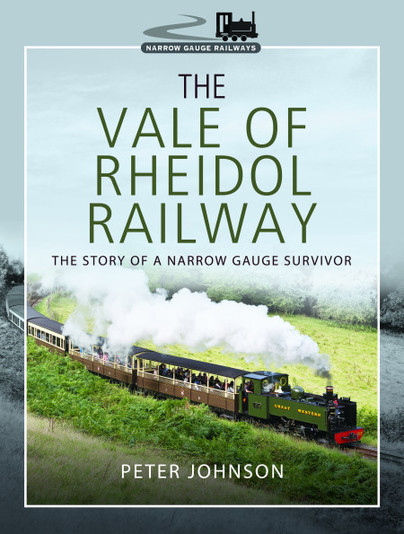 The Vale of Rheidol Railway (Hardback)

The Story of a Narrow Gauge Survivor

Add to Basket
Add to Wishlist
You'll be £30.00 closer to your next £10.00 credit when you purchase The Vale of Rheidol Railway. What's this?
+£4.50 UK Delivery or free UK delivery if order is over £35
(click here for international delivery rates)

Built to carry minerals from mines in the Rheidol valley, the 2ft gauge Vale of Rheidol Railway found its niche carrying tourists to the tourist attraction at Devil’s Bridge, 12 miles inland from the Cardigan coast resort of Aberystwyth. Taken over by the Cambrian Railways and then the Great Western Railway, it became the last steam railway operated by British Rail. In 1989 it became the first part of the national network to be privatised.

Now under the control of a charitable trust it is undergoing a revival that will see it become one of the leading tourist attractions in Mid-Wales.

This book provides a comprehensive history, and includes historical images not previously seen. There are also plenty of full colour views covering the line over the last 50 years or so, coloured plans and maps and no less than twenty appendices covering such aspects as operating costs, locomotives used and Board of Trade returns.

This is a highly recommended addition to the library of works on the UK narrow gauge.

The book is comprehensively illustrated with photographs spanning the entire history of the line, plus maps, diagrams and tabulated information. An excellent publication, well worth its cover price, and thoroughly recommended.

An interesting book for preservation lovers.

The book is interesting in its description of the various periods in the life of the railway which, combined with many period photographs, make it an enjoyable read.

A well designed and laid out book that adds to the history of a fascinating line, thoroughly recommended.

Built to transport minerals from mines in the Rheidol Valley, this 2-foot-wide railway found its niche leading tourists to the Demon Bridge tourist attraction, 12 miles inland from the Cardigan coastal resort of Aberystwyth. It became the last steam railway operated by British Rail and in 1989 in the first part of the network to be privatized. Now, under a charitable trust, he's experiencing a renaissance that will make him one of Mid-Wales' top tourist attractions.

A great book about a small railway with a lot of history that has managed to adapt to the new times and become a tourist attraction without losing its charm. A history similar to the one we have in Spain with the Steam Train of the Basque Railway Museum or the Utrillas Mining Train. The most noteworthy thing, as in many books of this publishing house, is the large number of good photographs it contains and how complete its information is.

It is a complete story of the line to date, an enjoyable read and a good pictorial record of this attractive railway. So a good way to spend some time in lock-down!