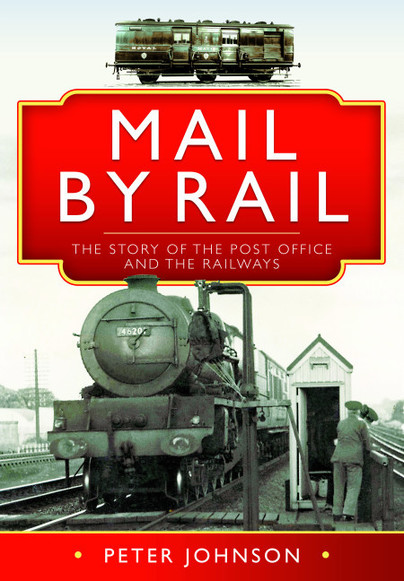 The Story of the Post Office and the Railways

Preorder
Add to Wishlist
You'll be £31.50 closer to your next £10.00 credit when you purchase Mail by Rail. What's this?
+£4.50 UK Delivery or free UK delivery if order is over £40
(click here for international delivery rates)

Railways have been used for the carriage of mail since soon after the Liverpool & Manchester Railway opened in 1830, the development of the first travelling post offices following, enabling the Post Office to achieve maximum efficiencies in mail transportation. As the rail network grew the mail network grew with it, reaching a peak with the dedicated mail trains that ran between London and Aberdeen.

The Post Office also turned to railways when it sought a solution to the London traffic that hindered its operations in the Capital, obtaining powers to build its own narrow gauge, automatic underground railway under the streets to connect railway stations and sorting offices. Although construction and completion were delayed by the First World War, the Post Office (London) Railway was eventually brought into use and was an essential part of Post Office operations for many years.

Changing circumstances brought an end to both the travelling post offices and the underground railway but mail is still carried, in bulk, by train and a part of the railway has found a new life as the Mail Rail tourist attraction.

Author Peter Johnson has delved into the archives and old newspapers to uncover the inside story of the Post Office and its use of railways to carry the mail for nearly 200 years.

Mail By Rail, from Peter Johnson, is an attractive and informative volume that highlights how the rail system(s) affected and improved mail delivery.

There was so much information here that was entirely new to me. Part of that is because I'm from the US and part is because I have tended, unfortunately, to take mail delivery for granted.

I was probably most fascinated by the underground London postal rail system, though I also found the whole TPO idea intriguing... The wonderful photographs and illustrations also provided great visuals to accompany the text.

Highly recommended for both rail/train enthusiasts as well as those with an interest in stamps and postal history. Even for someone like myself who just likes to learn new things, this is a rewarding book.

An interesting romp through the history of mail by rail which begins surprisingly early in the history of railways. Well illustrated throughout this book provides a look at the network of mail trains, both expanding and contracting, as well as a look at the Post Office Railway that ran beneath the streets of London. The changing demands of the post network and the 'improvements' made are assessed before concluding with some of the older mail vans in preservation meaning readers can follow up with visits to places of interest.

A well produced volume, knowledgeably written but with readability in mind.

Great brilliant book, well written. Enjoyed every moment. Worth reading
Must read for everyone.
Definitely buy

After visiting the Postal Museum in London a few years ago, I was intrigued by this system. Mail by Rail did not disappoint with the level of research and detail in this book. The Royal Mail System is amazing. The numerous photos in this book helped bring the text to life to see the ways the mail got onto a train and how it was sorted on a carriage. If you want to learn more about how mail moved around the UK from the 1800s to now, this book will give you everything you need to know.