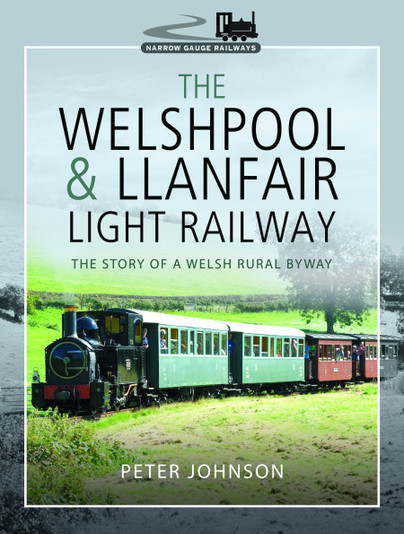 Click here for help on how to download our eBooks
Add to Basket
Add to Wishlist
You'll be £15.59 closer to your next £10.00 credit when you purchase The Welshpool & Llanfair Light Railway. What's this?
Need a currency converter? Check XE.com for live rates

This book, from prolific author Peter Johnson, is one of the latest from local publishers Pen and Sword. It is a large format hardback book with dust jacket, running to 232 pages, and printed throughout in heavy quality gloss paper. Inside the front and rear covers can be found excellent maps of the complete line, together with gradient profiles.
The book is an exhaustive and well researched history of the line from inception through to the preservation age. It's clear that Peter looks at the development from an historian's viewpoint, covering many of the earliest records from the Cambrian Railway through the Great Western Railway to the BR period and finally to the preservation railway era.
This is definitely not just a book of pictures, as there is so much additional information. It is profusely illustrated with a good selection of excellent quality colour photographs, mostly from the camera of Peter himself. There are historical pictures aplenty, most of which I have not seen in print previously. Many are delightful period colour images. The locomotive and rolling stock pictures give a good view of the different locomotives that have worked on the line over the years. Many were visitors, whilst others have been used in the early preservation era. I was particularly pleased to see "Nutty" the unusual Sentinel locomotive with outside chain drive and very confined cab. I am quite certain in this "Health and Safety age" this would not be allowed! The strong links with the Austrian Zillertalbahn and the Sierra Leone railways have resulted in the arrival of passenger coaches from both lines, together with with Hunslet built No 85 and the loan of Zillertalbahn number 2.
From a modeller's point of view, much will be found of interest. If I could just make one comment it would have been nice to have a few scale drawings included although this is just a personal view.
Clearly, this volume is well up to the high standard we have come to expect from Pen and Sword, and it may well be considered the definitive history of this most fascinating narrow-gauge railway.

A detailed and interesting study of the satisfaction of a dream fulfilled.

"In conclusion, another interesting and detailed account of one of the Welsh narrow gauge railways."

The author has gathered an impressive collection of photographs, newspaper cuttings, plans and maps from all eras, with the high standard of reproduction and graphic design which is now the norm with this publisher. Overall another excellent history of a Welsh narrow-gauge line from a commendably painstaking author. Thoroughly recommended.

A worthwhile addition to the published material on this delightful railway, and likely to prompt even more interest amongst modellers.

This is a first class book about a delightful railway. It comes highly recommended.

It is a good quality book with good photos and detailed but readable and enjoyable text. It tells a story of a rural railway with basic facilities that served its community for around 50 years, then after a difficult transition to preservation, has flourished as a characterful tourist railway. Whether it is a line you know well or not, if you like narrow gauge or minor railways then I am sure you will enjoy this book.

This book follows the same format of the earlier works by this author, drawing extensively on press reports and company archives... Recommended.

A superb book which I'm sure will tell you all about the background to the railway, its development and closure and the relaunch into one of Wales' most pleasant preserved railways. The quality of the images, many very old, is good. Highly recommended.

This is another fine work from the author, and the publishers have done it justice with the quality art paper on which it is printed, and the pin sharp reproduction of the illustrations.

Peter Johnson continues his interesting look at yet another narrow gauge railway in Wales, this time it's the lovely Welshpool and Llanfair Light Railway and this fine book adds to his other interesting Pen & Sword books on the Ffestiniog Railway.

... this is a pleasant book with much detail to satisfy any lover of the Welsh narrow gauge and at £30 good value for money.

The book provides an informative narrative describing the full history of the railway... Over 200 good quality colour and monochrome photographs and maps are included. There is a bibliography and index, together with fourteen appendices supplying useful facts and statistics.

... a worthwhile book for any lover of the Welsh narrow gauge and at £30, good value for money.

'The easy reading text sets out the story and rebirth of this fascinating line located on the Shropshire Welsh border and is a must for GWR and narrow gauge enthusiasts alike.'