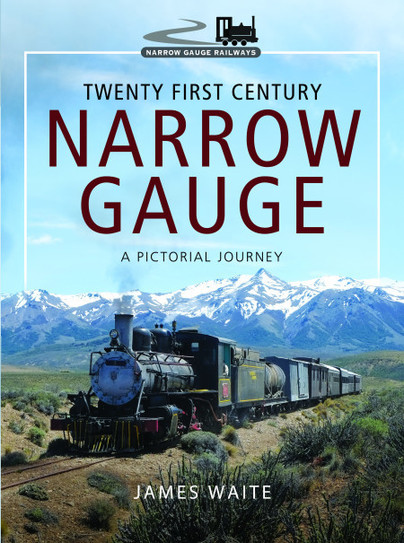 Add to Basket
Add to Wishlist
You'll be £35.00 closer to your next £10.00 credit when you purchase Twenty First Century Narrow Gauge. What's this?
+£4.50 UK Delivery or free UK delivery if order is over £35
(click here for international delivery rates)

James Waite has been a skilled railway photographer for many years. In this book he has brought together photographs of many of the world’s steam-worked narrow gauge railways in the twenty-first century, concentrating mostly on views which show the scenery, both natural and man-made, through which they ran. They are accompanied by extended captions; the fruit of extensive research containing much historical information about the railways and their locos. He also offers many fascinating insights into the districts and communities which they serve, along with anecdotes about his adventures while visiting them which are often amusing and always informative.

This book then is a superb collection of photos and information for lines that some people cannot get to, or may not see a train run again – like the Penrhyn Quarry Railway in Wales.

Whether you want to see photos from railways in your country or see how other railways operate around the world, Twenty First Century Narrow Gauge is a great addition to any bookshelf.

The quality of the photographs in this book are excellent, very good value and thoroughly recommended.

The pictures in the book show a practiced eye for composition and by no way are just three quarter views of the train, this is very much a book featuring the train in the landscape where foreground interest has been included and enhanced what was already an excellent picture.
In summary an excellent book for anyone with an interest in twenty first century narrow gauge around the world.

This substantial new book brings together an excellent selection of high quality photographs of many of the world’s steam-worked narrow gauge railways which have survived into the twenty-first century.

The visuals consist of 329 wonderful color photographs each more striking. Each of them could give rise to a new book... Impressive.

James Waite has toured the world and taken photographs of nearly all the remaining steam-worked narrow gauge railways in the twenty first century.
His well produced full colour photographs give a great insight into what is left and the district and communities of where they are. His many anecdotes about his adventures while visiting these communities are very informative often amusing.

A welcome addition to all personal, community, and academic library railroading history collections, "Twenty First Century Narrow Gauge: A Pictorial Journey" is a truly extraordinary volume that will be especially appreciated by dedicated railroading history buffs.

James Waite was brought up in Devon within sight and sound of one of the GWR’s prettiest branch lines and can’t remember a time when he wasn’t an ardent enthusiast. He was introduced to the narrow gauge at school which, conveniently, was within sight of the old Lynton & Barnstaple Railway. Its route was then largely intact even though the track had been lifted twenty-five years earlier. A family holiday in North Wales saw the start of an affection for the little trains which has continued ever since. Many years later, retirement from full-time work has enabled him to discover for himself the many fascinating railways still running in far-away places. He is a regular contributor to 'Narrow Gauge World', the UK’s leading magazine in its field.