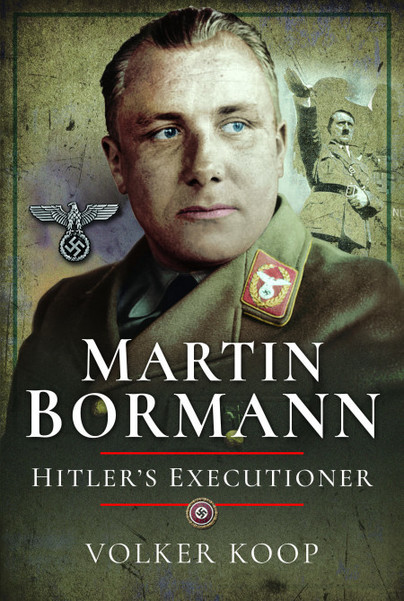 Add to Basket
You'll be £25.00 closer to your next £10.00 credit when you purchase Martin Bormann. What's this?
+£4.50 UK Delivery or free UK delivery if order is over £35
(click here for international delivery rates)

Born on 17 June 1900, Martin Ludwig Bormann became one of the most powerful and most feared men in the Third Reich. An obsessive bureaucrat, it was Bormann who helped steer Hitler’s apparatus of terror so effectively that he became the clandestine ruler of Nazi Germany.

After joining the Nazi Party in 1927 Bormann rose through its ranks. Indeed, by July 1933 Bormann had manoeuvered himself into the position where he became the Chief of Cabinet in the Office of the Deputy Führer, Rudolf Hess. In this role Bormann gradually consolidated his power base, so that when Hess carried out his infamous flight to the United Kingdom in 1941, Bormann stepped into his shoes.

As the head of the Party Chancellery, Bormann duly took control of the Nazi Party. By the end of 1942, he was in effect Hitler’s deputy and his closest collaborator. With the Führer increasingly preoccupied with military matters, Hitler came to rely more and more on Bormann to handle Germany’s domestic affairs. On 12 April 1943, Bormann was appointed Personal Secretary to the Führer.

Feared by ministers, Gauleiters, civil servants, judges and generals alike, Bormann identified strongly with Hitler’s ideas on racial politics, destruction of the Jews and forced labour and made himself indispensable as the Führer’s executioner. Cold as ice, he decided the fate of millions of people.

In January 1945, with the Third Reich collapsing, Bormann returned to the Führerbunker with Hitler. Following Hitler’s suicide on 30 April, Bormann was named as Party Minister, thus officially confirming his rise to the top of the Party. Late the following day he fled from the bunker in an attempt to escape the encircling Red Army; his fate remaining a mystery for many years. In October 1946 he was found guilty in absentia by the International Military Tribunal at Nuremberg and sentenced to death.

Drawing heavily on recently declassified documents and files, the historian and journalist Volker Koop reveals the full story of the most faithful member of Hitler’s inner circle, an individual who, whilst little known to the German people, became the second most powerful man in the Third Reich.


This book looks at the life and aspirations of Martin Bormann, who would become deputy to one of the world’s most evil men in Adolf Hitler. This book looks at his rise through the ranks to the top table, now considering the leadership team didn’t get on or trust each, with each one trying to gain favour with Hitler. The paranoia and scheming with each other took its toll and it was a case of finding out would rise to the top. The book written by the well renowned Volker Koop, looks into great detail about a very unwholesome man and his journey, not only to the top table but to his death.

Overall you have to say this book about Martin Bormann is a powerful and staggering book from start to finish. If you already know about the man it shows that all the plotting and shenanigans were all purely to get himself as far as he could. The answer is yes, he did he get as far as he could as Hitler’s deputy, Hitler ‘circle of power’ was a as far as you could get because of all the power plays by the various people in the Nazi regime. Bormann had to use luck and manipulation to get up the ladder which if everyone else was like that you can imagine how disturbed the circle of power was. This is a an excellent book of very poor and depressing type of person, it is richly and very well told, the author Volker Koop has done a decent job. It was written fairly I would say, and didn’t think he was unfairly represented. What comes across is a calm and cold person who want out to get what he wanted for his own gain. A book that flows well off the page. Easy to read and well worth 5 stars.

Martin Bormann was a man who had so much power because of his closeness to Hitler. He used his pen and power to forward his agenda. Hitler trusted him without question to further his plan. This book offers new insight into the organization of SS and how Martin used his closeness to Hitler to abuse and kill so many from the safety of his office.

Martin Bormann became such a crucial cog in ensuring that the Nazi war machine kept turning and was responsible for some of the biggest and most devastating decisions the party made whilst in power. He quickly rose through the ranks to become one of Hitler’s most trusted comrades, his right-hand man and, without question, the second most powerful man in the Third Reich. It becomes immediately clear just how manipulative a person he was and was apparently someone who would do anything to get to the top. Legend says he escaped, alongside other Nazi officers, to South America when Hitler suicided himself in the bunker, where a large clandestine network of communists resided, and settled in a house in the Teyu Cuare provincial park following the fall of the Third Reich. However, on 7 December 1972, construction workers uncovered human remains near Lehrter station in West Berlin which were conclusively identified as Bormann's in 1998 when German authorities ordered genetic testing on fragments of the skull.

This is an engaging and extensively researched account of the life and times of one of the evilest men in history and from the very beginning, I found myself fascinated. You know you're in safe hands when a book is written by award-winning Nazi investigator and prolific history writer Volker Koop and whilst it is accessible it is extremely dense and in some parts quite academic. It's one of the strongest biographical accounts I've come across and explores Bormann’s life before and during his years as a high-ranking Nazi and gives both a personal and professional look at the life of a power-hungry manipulator. Eminently readable and flowing well from one page to the next, this is a book history connoisseurs should definitely pick up. I appreciated the inclusion of newly discovered archival information which held intriguing facts that were previously unknown and this new insight only added to the authenticity of the book.

Overall this is an interesting and thoroughly detailed account of Bormann which is well written and illustrates just how influential he was in the party. Having become Hitler's gatekeeper whereby any and all communication had to go through him and he was in the position he wanted for the time being. Prior knowledge of the Nazi regime and its set up would be preferable before jumping into this biography. Koop even includes a bibliography and points you in the right direction should you wish to read more on the subject. A superb book. Many thanks to Frontline Books for an ARC.

A fascinating look at an awful human being. Koop details the meticulous rise of Bormann to his position as Hitler's right hand man. It convincingly argues that Bormann can be considered the second most powerful man in the Reich (while other more infamous names might more readily come to mind). Koop's use of correspondence and newly discovered archive materials add to the personal examination of Bormann the individual and lend new insight that expands the existing historical record. The book is well written and accessible to the general reader, but a familiarity with literature on the Third Reich, and the elaborate structures of the Nazi military and political hierarchy is helpful. This book was interesting to read while considering Ian Kershaw's concept of 'Working toward the Fuhrer' which postulates that those closest to Hitler worked to please him by carrying out his will without Hitler having to state orders directly. Bormann certainly exemplified this, and arguably used his position to ensure others "Worked towards Bormann' as he solidified his position as gatekeeper to the Fuhrer

This was a deep and thorough biography of the second most powerful man in the Third Reich. It gives a personal as well as a professional picture of Bormann, his way to success despite all odds, his (not so amicable) personality and more.
I appreciated the use of his letters as well as other sources from WWII, it made the book much more believable and reliable - not that it would not have been so without them, it was written very, I would say, reader friendly and although the reader must have certain knowledge of the Regime before reading, Volker Koop explained anything that the average person might not have known.

I recommend this book to everybody who is fascinated by history - if I were to be honest, everyone should read this book, even to simply understand human character better, but who am I kidding. People would rather read about Kylie Jenner's newest outfit. How sad.

This book is recommended for individuals with background knowledge on the subject matter as it is heavily academic. However, if you are a history buff, this book is right down your alley. I was pleasantly surprised to learn a lot of new facts even thought I have previously read many books on the matter and didn’t think I would! The author researched well this book, yet made it easy to read.

Very interesting to read. The book was very well written. It flowed well. Lots to think about. Interesting subject to learn about.

This is a very detailed account of Martin Bormann and his rise to power. He was to become the man closest to Hitler.

Mr. Bormann strikes me as a slimy manipulator. He weaseled his way to become Hitler's gatekeeper. All communications went through him, whether addressed directly to Hitler or not. This was a perfect set up, for Hitler didn't want to deal with domestic affairs, or be bothered with ordinary citizens. He was too busy “directing” what he saw as his brilliant strategies for conducting the war.

He was nicknamed by the other Nazi officials, “The Brown Eminence.” (Make of that what you will.)

This book contains notes and a bibliography for those who wish to further explore Martin Bormann's life and times. Fascinating and full of minutely detailed information about Bormann's actions – mostly to protect his own position as Hitler's confidante – this book is easy to read and understand. I highly recommend it to anyone who is interested in the personalities of those whom Hitler chose to surround himself.

A fascinating account of the rise and life of Martin Bormann. His death was in doubt but Mr Koop has reports that evidence for his death was found in Berlin years after the war. It is amazing to me that someone so powerful could die so unnoticed and uncared for after years of rulership and largesse. Mr Bormann was a loyal mouthpiece for Hitler but it seems he was also power hungry and had hopes of leading the Reich after Hitler killed himself in the bunker. This book covers it all in a readable way. Reading this book made it clearer than ever that some politicians and power hungry people exist and should be avoided. Some of Bormanns children survived the war and went on as best they could. A very interesting book that highlighted mans worst offenses against other humans.