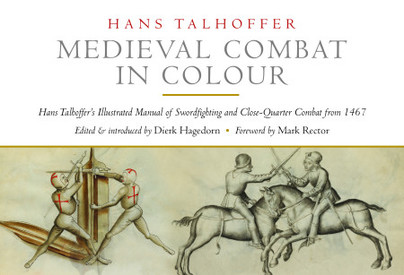 Add to Basket
Add to Wishlist
You'll be £19.99 closer to your next £10.00 credit when you purchase Medieval Combat in Colour. What's this?
+£4.50 UK Delivery or free UK delivery if order is over £35
(click here for international delivery rates)

Hans Talhoffer's professional fencing manual of 1467 illustrates the intricacies of the medieval art of fighting, covering both the 'judicial duel' (an officially sanctioned fight to resolve a legal dispute) and personal combat.

The first thing I love about this book, is it’s size.

It is clearly meant to be used as a training resource.

The second thing I love about this book, is they take one image per page and give a “simple” interpretation of what is going on. Not overly flowery but basic follow along guidance. It is a great book to open you up to the world of Talhoffer.

I love this book and every one in our school needs to own it. We use Talhoffer for Messer and will introduce Talhoffer dagger into practice too.

The book itself is almost a complete curriculum including wrestling, unarmoured fighting with the long sword, pole-axe, dagger, sword and buckler, and mounted combat.