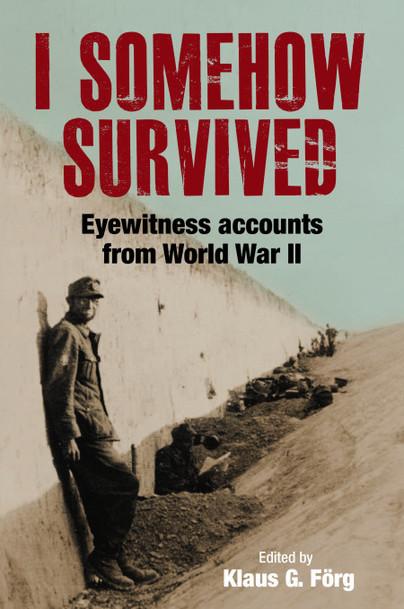 Add to Basket
You'll be £15.99 closer to your next £10.00 credit when you purchase I Somehow Survived. What's this?
+£4.50 UK Delivery or free UK delivery if order is over £35
(click here for international delivery rates)

The first in a series of books, I Somehow Survived is an extraordinary collection of true stories giving testimony to those who survived World War II. Based on interviews with numerous veterans from across the spectrum of wartime experience, the book documents and reflects upon one of the most gruesome times in history.

From anti-partisan warfare in the French mountains, atrocities in East Prussia, to the experience of a Norwegian concentration camp, the book includes rarely heard stories from a range of people caught up in the war. With the distance of time, these survivors have been able to offer new perspectives on their experiences and expose truths they would not have dared admit several decades ago.

German Army officers reveal their role in the Vercors and Kiev massacres. A Luftwaffe officer-applicant who never flew describes service on the ground. And a Norwegian woman writes of marrying a German Kriegsmarine while her mother was in a Norwegian concentration camp for political activity and her father was in hiding from the Gestapo. "I have no objection to your marrying him,” her father told her, “I just want them to give us our country back."

Everyone's experiences differ - and that is why a book like this is important - to provide another perspective. I would strongly recommend this book to anyone who wishes to find out more about the German experience of the war, and I look forward to the rest of the series.

It is always refreshing to hear the German side of the story. The recollections seem pretty open and candid, and the supporting photos help reassure one... fascinating stuff.

Not the happiest of books and these people went through hell as the Germans gradually lost the war, but they survived and as old men and woman have the chance to tell their story. It is good to read the ‘other side’ now and again and it is worth it to read about life in the German armed forces, initially fighting to conquer, latterly to survive as they are forced to withdraw back into Germany.

An interesting collection of stories from actual survivors of the war. These are the stories of little known people and their struggles. I found their stories compelling and interesting.

The compelling thing about this book is the range of perspectives brought to bear. So often readers are offered a single perspective and books like this demonstrate why diversity of view adds such value when looking back on key periods in history. I found it especially interesting to hear from members of the Luftwaffe. I have read a lot of about WWII but generally from the perspective of the allied forces so this was a real eye opener.

Klaus G. Förg is a German publisher, photographer, journalist and radio presenter. His great passion for photography can be seen in various illustrated books. Förg started his career as teacher before working as product manager and editor for different publishing companies. He went on to found five bookstores and in 1993 took over the management of Rosenheimer Verlagshaus from his father.