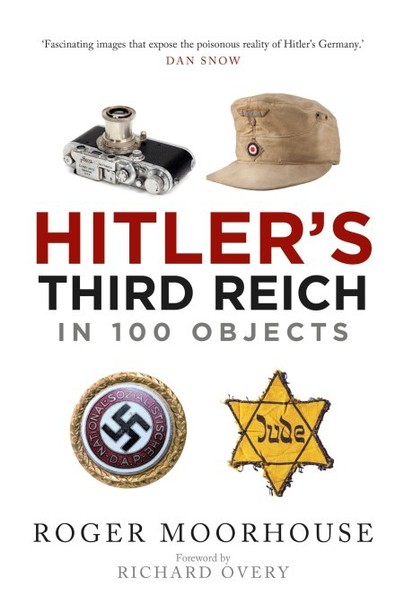 If you are interested in the third Reich this book is for you.

A well-researched book, I could not put it down.

The horror of this period in German and European history must be told and never forgotten, and this book tells that story so clearly. This is an engaging read that I would recommend to anyone with an interest in the history of the Third Reich or the Second World War. The object selections are spot-on, and Moorhouse has the period framed perfectly from #1 Hitler’s paint box to #100 Goring’s cyanide capsule. Those two objects in a way says it all. Highly recommended.

An interesting guide to the history of the Third Reich.

A superbly presented collection of very diverse objects, documents, buildings, vehicles and weapons, which collectively give a snapshot of life in Nazi Germany, demonstrating its technological prowess on the battlefield, and methods of social control on the home front. Amongst these are many instantly recognisable items which one would expect to see, such as the Swastika, Mein Kampf, Tiger tank, Luger pistol, and the Judenstern gold star, but there are many more obscure ones with equally significant stories to tell, including forced labour and ration cards, the jerrycan, propaganda posters, the Volksturm armband, a souvenir beer stein from a Nuremberg Rally, and, most sinister of all, a canister of Zyklon-B. Each are described with mostly colour photographs over the course of two or three pages, and they demonstrate how even small and seemingly innocent objects can be put to dreadful use.

The ‘…in 100 Objects’ series is an interesting approach to history that combines the familiar with the surprising. The author has selected a broad range of objects that neatly encapsulate the Third Reich. – Highly Recommended

As one would expect from Roger Moorhouse, an author with impeccable credentials, this is a brilliant book which is beautifully photographed, in full colour, with clear and detailed explanatory accounts to explain the significance of each object and its role in the history of WWII. The book is a fascinating snapshot of the war and revealed much that was unknown to me. Broad in its choice of
artefacts, from the holocaust and across the war, to technology and social objects, the book is a veritable and informative treasure trove.

Having met Rudolf Hess in Spandau Prison, I was surprised and amused to see his quaint underpants worn following his flight to Scotland featured as an article explaining his extraordinary flight. Especially sad are the relics of the Jewish experience, a reminder of the savagery unleashed across Europe by the Germans.

A remarkable book and highly recommended.

This is one of my favourite ways to tell history – through the objects that would have been in use, or around at the time, I really love that they can link social history back to them too.

This book provides a great insight in to some of the lesser well known objects and some that are a little unexpected too! What this book gives the reader is a wide range of objects that illustrate all aspects of life of that period, from politics to the normal, mundane life and I liked that there is such a real variety and it is not solely down to just what was associated with Hitler himself, there was after all more than just him in The Third Reich and it is a refreshing change to see this having a different focus in the main.

There are so many objects that could have been chosen for this book, I love the ones that Roger Moorhouse has chosen – I am sure that it was not an easy task to select the ones he has and I am sure there would be scope for a follow up to this book too if there was interest I for one would definitely be keen to read it!

It is 5 stars from me for this one, this was a fascinating book and I have told my husband, who also has a strong interest in WWII, to read this one as soon as possible – I loved the different way of broaching this subject and it is one for me that stands out from other books that cover this period – very highly recommended!!

The caution is that if you have a few minutes to read one entry you get drawn into the next and the next. This book is that readable.
We highly recommend it.