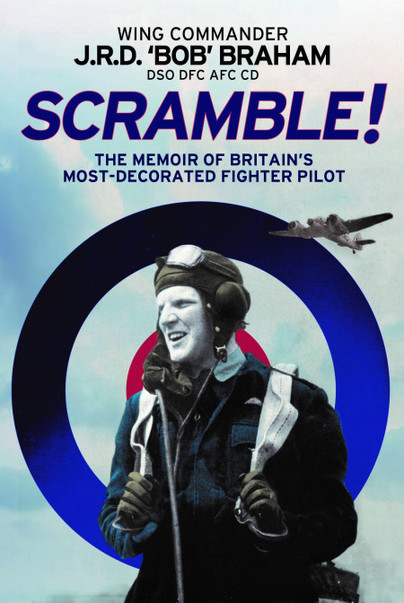 Add to Basket
Add to Wishlist
You'll be £13.99 closer to your next £10.00 credit when you purchase Scramble!. What's this?
+£4.50 UK Delivery or free UK delivery if order is over £35
(click here for international delivery rates)

J. R. D. ‘Bob’ Braham was Britain’s most-decorated fighter pilot and one of the most successful fighter pilots of World War II.

Joining the RAF in 1938 at the age of 18, he was posted to No. 29 Squadron at Debdon, where he learned to fly the Hawker Hurricane and Bristol Blenheim. By 1939, the squadron had become a specialised night fighting unit and Braham gained his first victory in August 1940.

From that point on, he was constantly in action. Famed for his individual night-time intruder sorties, he also took part in the Peenemiinde raid, the Battle of Britain, and the fight against the V1s and V2s during the Blitz. In 1943, battle fatigued, he moved into an operational role but continued to fly operations until June 1944 when he was shot down and captured. Having completed 316 missions, he spent the next eleven months as a Prisoner of War, and was finally liberated in May 1945.

With 29 confirmed combat victories, Braham achieved more success in night fighting than almost any other RAF pilot and was awarded the triple Distinguished Flying Cross (DFC), the triple Distinguished Service Order (DSO) and the Air Force Cross (AFC). Told in his own words, with all the spirit and dynamism for which he was known as a pilot, this is Braham’s extraordinary story.

If you love boys’ own type stories of grit and determination this book will surely appeal to you. The book basically goes through the life story of J R D Braham from when he first joined the RAF through many ups and downs. Braham is probably not one of the most well-known names of fighter pilots but when you think how many top-notch fighter pilots this country produced, it’s no surprise. I think this book clearly shows the story of a family man having to work and survive in some very trying circumstances. He seems like a thoroughly good and interesting man, certainly an excellent read indeed.

A really good read. For anyone who takes an interest in the air war in Europe during WWll, this is the book for you. We may have heard of the more popular airmen of that time but here is his own story of one of the most successful fighter pilots of the RAF with most of his victories achieved at night and at a young age. The book begins with his being shot down in 1944 and taken prisoner with his navigator, then takes us back through his life before the war, his interest in flying and joining up in 1938 to fly. His active career throughout the war is interspersed with his description of his conflicting interests while serving in the RAF and his marriage and growing family who were separated from him for most of his operational period. That relationship was not really mended until he was released from captivity in 1945.
The night fighting descriptions are fascinating as it deals with the fast moving technological developments of airborne radar on both sides and the tactics that were adopted to use that equipment effectively.

A truly fantastic book covering one of Britain’s most-decorated and successful fighter pilots during world war two.
Written in a relaxed style that compels readers to not to put the book down, it delights the reader in detailing operations flying various aircraft documenting the combat experienced by the author.
It is refreshing to read about air combat operations in other aircraft of the RAF such as the Beaufighter and Mosquito than the usual Spitfire or Hurricane.
If you have an interest in air combat, aviation in general or love a good war story then this book is a must!
A compelling read, highly recommended as one of the best biographies of a World War Two fighter pilot!
This one needs to be on your bookshelf!

John Randall Daniel ‘Bob’ Braham, DSO & Two Bars, DFC & Two Bars, AFC, CD was a Royal Air Force night fighter pilot and fighter ace during the Second World War. Born in 1920 in Holcomb, Somerset, he joined the RAF in 1938 and went on to become the most highly decorated fighter pilot of the Second World War. After the war, he emigrated to Canada with his family. He served in the Royal Canadian Air Force before moving into the civil service, where he worked until his death from an undiagnosed brain tumour in 1974, aged 53.