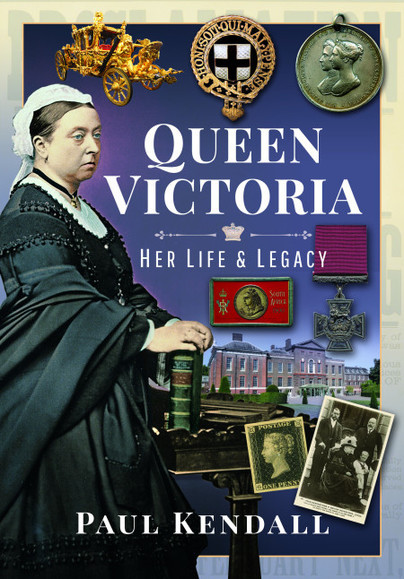 Click here for help on how to download our eBooks
Preorder
Add to Wishlist
You'll be £9.98 closer to your next £10.00 credit when you purchase Queen Victoria. What's this?
Need a currency converter? Check XE.com for live rates


This book would be wonderful in the hardcover format. It chronicles Queen Victoria's life accompanied by full page photos, mostly in color- as the narrative goes along. It is important to note that Queen Victoria was the first Queen of England to be photographed...before that there were only paintings. This tome covers so many aspects of her long reign such as ships she christened, places she visited, homes and castles she lived in, medals she awarded and designed, dresses she wore-and much much more. The book ends with her death and funeral, with a full compliment of photos depicting her casket on a gun carriage and her final resting place beside Prince Albert in their mausoleum at Frogmore, Windsor. I marveled at the detail given here of her deathbed, body preparation, and the secret instructions of what would be discreetly placed in her coffin. This wasn't a "heavy" read, which was a pleasure. It was simple and straightforward. If I wasn't interested in a topic (such as a particular ship) I could skim by it, look at the picture and move on. I read this as a protected pdf on my computer where I was really able to appreciate the photos. At just 240 pages, this was a concise presentation of the life of Queen Victoria.

As featured in: New book on Queen Victoria and her gift to Ely

As featured in: BOOK ‘QUEEN VICTORIA: HER LIFE & LEGACY’ IS SET TO BE PUBLISHED IN FEBRUARY

As featured in: Queen Victoria's link with Sidmouth featured in new book

Anyone interested in reading about Victoria the person and the queen should seek this out. Though I have read loads of books on the subject, this is brilliantly informative and immersive.

As featured in: 'Details of Queen Victoria’s
gift to Ely features in a new
book'

A glossy book (if you can call a Kindle book glossy), there is an abundance of visual material in the book. What one could simply take as coffee table book on the life of the queen is much more than that. There's a depth that most picture books don't have, and seeing photographed items that Queen Victoria actually used made the text come to life.

A no-frills biography presented in austere, short chapters. I dare say her highness, Queen Victoria, would have approved of the no-drama writing style. Images portray major events, persons, and locations of Queen Victoria's life to help set the scene. A good, basic biography that is easy to read. 2-4 page chapters make for easy pickup and set down for those with a busy lifestyle. A great starting point for those researching Queen Victoria and her time period. Sources are meticulously cited within text for both information and images.