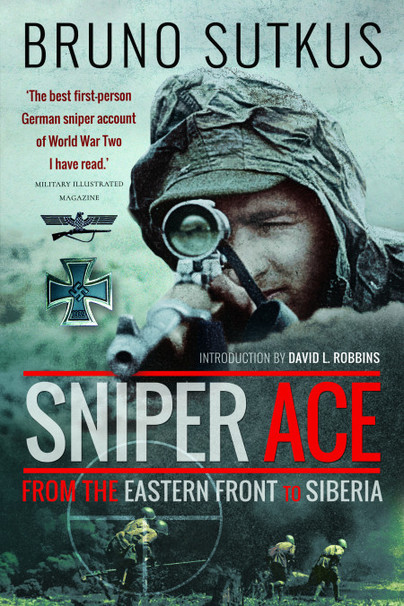 Add to Basket
Add to Wishlist
You'll be £7.79 closer to your next £10.00 credit when you purchase Sniper Ace. What's this?
+£4.50 UK Delivery or free UK delivery if order is over £35
(click here for international delivery rates)


Bruno Sutkus joined the Wehrmacht in 1943, and, despite his young years became one of the most prolific snipers of the war, claiming 209 kills in just six months on the Eastern Front. There are a number of equally superb memoirs which explore this deadly art, the methods they employed, and their insight into what makes a successful sniper; Sutkus does all of this, but what sets his account apart is the extremely rare inclusion of notes from his log, recording the date, place and brief circumstances of every kill. This alone would make it one of the most valuable narratives on the subject, but the second half of the book is just as compelling, telling the story of his extraordinary and harrowing struggle for survival in the post-war Soviet Union. Forced to join the Red Army, he immediately deserted and attempted to join the Lithuanian Resistance, but eventually fell into the hands of the NKVD, who tortured him before banishing him to a Siberian Gulag. He was released after 12 years hard labour, but it was not until 1997 that his struggle finally came to an end when he was at last allowed to leave Russia and return home.

The best first-person German sniper account of World War Two I have read, well documented and illustrated, a fascinating story.