Victor of the Battle of Britain, Defender of Malta

Add to Basket
Add to Wishlist
You'll be £15.99 closer to your next £10.00 credit when you purchase Air Marshal Sir Keith Park. What's this?
+£4.50 UK Delivery or free UK delivery if order is over £35
(click here for international delivery rates)

The Battle of Britain from July to September 1940 is one of the finest moments in our Nation’s history. While credit rightly goes to ‘The Few’, victory could never have happened without the inspirational command and leadership of New Zealander Keith Park.

He and Air Chief Marshal Sir Hugh Dowding ensured that Fighter Command was prepared for the Nazi onslaught. Promoted to Air Vice Marshal, Park took over No 11 Group, responsible for the defence of London and South East England in April 1940. A shrewd tactician and hands-on commander, Park carefully husbanded his limited resources and famously wore down Goering’s Luftwaffe, thus forcing Hitler to abandon his invasion plans.

Shamefully Dowding and Park were dismissed from their commands in the aftermath of victory due to internal RAF politics. Fortunately, Park’s career was far from over and his management of the defence of Malta made significant contribution to victory in the Mediterranean.

This balanced and well overdue account hopefully ensures that Air Chief Marshal Sir Keith Park receives the credit for victory that he so richly deserves.

I recommend this book to anyone who wants to know who Keith Park really was and how crucial his leadership was to the RAF victory in the Battle of Britain.

This biography, as its sub-title suggests, concentrates on the part Park played in winning the Battle of Britain, and in the Defence of Malta. It has one brief chapter describing his ancestry and early life, and then two telling of his experiences in WW1; he joined the Artillery and served first at Gallipoli, and then in France before transferring to the RFC, and learning to fly at Netheravon.
By 1918 he was commanding a squadron on the western front, and then spent the years of peace in various roles, including that of Air Attaché, before being appointed to the post for which he is perhaps best known, commanding 11 group during the Battle of Britain. Given the book’s sub-title it so no surprise that the bulk of its content deals, in some detail, with Park’s role in the battle, his stance on the “Big Wing” controversy, and his and Dowding’s dismissal as soon at the battle was won.
Following chapters describe Park’s role in the defence of Malta and then his return, in 1948, to New Zealand. He had left his native land as a newly promoted corporal, and retired there as a highly decorated Air Chief Marshall.
The book, written by a fellow New Zealander, is illustrated with photographs and with maps and charts, and is completed by an extensive bibliography and a comprehensive index.

March/April issue of London Calling, the journal of the London at War Study Group

Click here to listen to interview with author Murray Rowlands 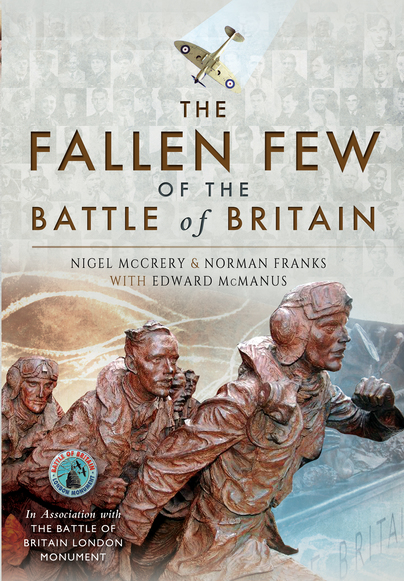 'Never in the field of human conflict was so much owed by so many to so few' – Seventy-five years on the unforgettable words of Winston Churchill ring as powerfully as they did in August 1940 when the young men of the RAF stood as the last line of defence against Hitler's far more powerful Luftwaffe. This emotional yet factual book describes the three and a half months (10 July – 31 October 1940) battle day-by-day and covers the essential details of every one of the 540 young pilots who died in this critical campaign that saved Britain from invasion by the Nazis. Thanks to the authors painstaking…

Click here to buy both titles for £35.98
More titles by Murray Rowlands