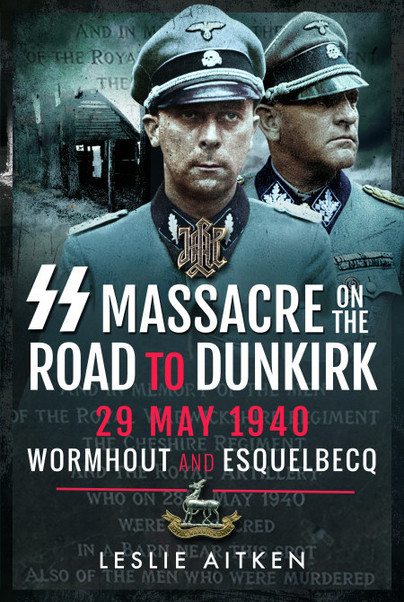 SS Massacre on the Road to Dunkirk (Hardback)

Preorder
Add to Wishlist
You'll be £15.99 closer to your next £10.00 credit when you purchase SS Massacre on the Road to Dunkirk. What's this?
+£4.50 UK Delivery or free UK delivery if order is over £40
(click here for international delivery rates)

The two most notorious massacres of British troops by the SS, at Le Paradis and at Wormhout, in northern France, took place within a day and forty kilometres of each other in May 1940.

At Wormhout the main victims of the carnage were members of the 2nd Royal Warwickshire Regiment; up to eighty men were butchered in an old cowshed by members of II Battalion Leibstandarte Adolf Hitler. The murdered men were part of the outer perimeter of the BEF that provided protection for the evacuation beaches at Dunkirk, which was getting into full swing at the time of these dreadful events.

Whereas the man primarily responsible for what happened at the ill-named le Paradis was brought to justice and executed in the immediate post war period, the same could not be said for Walter Mohnke, the man many have claimed to be behind what happened at the atrocity in the old barn near Wormhout. Besides the events in northern France, he was also accused of engaging in a massacre of Canadian and American soldiers in Normandy and the Ardennes towards the end of the war. In the final days of the Third Reich, Mohnke’s loyalty was considered by Hitler to be of such depth that he was responsible for security in the Fuhrer’s bunker in Berlin until the bitter end.

Leslie Aitken wrote this book, originally published in 1977, to ensure the memory of those heroic men who died in such terrible circumstances; and the respect due to those who survived the ordeal in the old barn. Only afterwards did he discover that not only had Mohnke survived the war but that he was living a prosperous class life in north Germany and was a successful businessman. Renewed efforts were made to prosecute those involved but they came to nothing and Mohnke died in his bed at the age of ninety in 2001.

This is a moving account of a shameful incident in a war with all too many incidents of gross inhumanity and barbarism. Researched over many years and making full use of eyewitness accounts of the men who survived, it is a worthy memorial to the men of 1940, additions to the stone memorial close to the site of the massacre and the more recent memorial park.

There is a new short introduction to this edition by Nigel Cave.

The Reverend Leslie Aitken was the national chaplain to the Dunkirk Veterans Association from 1954, soon after it was established the previous year. For many years he was the Rector of St Laurence Church, Alvechurch, in north Worcestershire. He devoted considerable time to the pastoral care of the members of the DVA; whilst his involvement with the Association helped him in finding several of the survivors of the massacre. He continued to be deeply involved in the campaign to bring to trial the guilty parties into the 1990s.