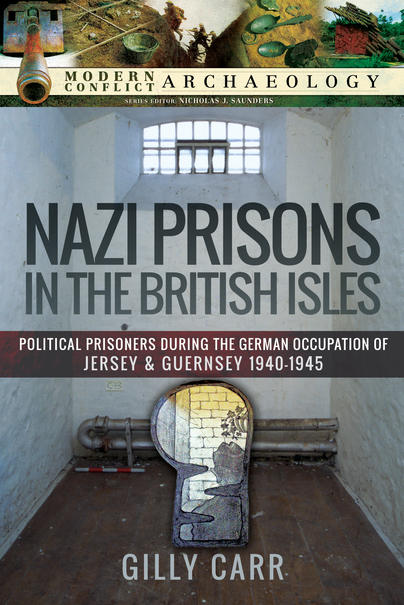 Political Prisoners during the German Occupation of Jersey and Guernsey, 1940–1945

Add to Basket
Add to Wishlist
You'll be £25.00 closer to your next £10.00 credit when you purchase Nazi Prisons in the British Isles. What's this?
+£4.50 UK Delivery or free UK delivery if order is over £35
(click here for international delivery rates)

Nazi Prisons in Britain is a ground-breaking book – a systematic study of Jersey and Guernsey prisons during the German occupation of the Channel Islands based on the experiences of the prisoners. It brings to light for the first time the surviving sources – memoirs, diaries, official archival material, poetry, graffiti, autograph books, letters and material culture are all included. This dazzling array of evidence reveals the reality of life behind bars in Nazi prisons on British territory.

Gilly Carr’s powerful book shines a light into political prisoner consciousness and solidarity, and shows how they resisted the regime with the limited tools at their disposal. It gives a fascinating insight into how the experience varied according to age, sex, class, and seriousness of offence.

The text is enlivened by the words of notorious wartime criminals, including Eddie Chapman – Agent Zigzag – and the traitor Eric Pleasants, who later joined the SS. Also featured are the letters of the ‘Jersey 21’, who later died in concentration camps, those of surrealist artists Claude Cahun and Marcel Moore, condemned to death for their resistance activities, and the lost prison diaries of Frank Falla, Guernsey's best known resister.

Britain had to abandon the Channel Islands in 1940 and did not even have adequate time to evacuate significant numbers of the population. The Germans started with a soft approach but political prisoners increased and the occupation became harsh, not least because the German logistics operation was unable to supply all the food and medicines required – Very Highly Recommended

This is a welcome addition to the literature on confinement... This is a fascinating work, both academic and approachable, and an excellent springboard for further work on the Channel Islands during the Second World War.

This is a really enjoyable book where I’ve learnt a huge amount of information, I would expect this book to be a surprise to many reader as we don’t often think about the events of the Nazi’s taking Jersey and Guernsey. It’s an event that often doesn’t get mentioned but this shouldn’t be the case but the people who lived there and went through this were very brave and strong. I would say this is a very good book, but it is also a very academic book which might deter some readers. It was nice that information in the book was taken from various sources of information which help give it a human face or feeling to the events. Credit to the author for writing such a good book, one that I would be very happy to recommend.

A great read to gain a new perspective on WW2. This book is extremely detailed and informative- if you’re looking for a light read this isn’t the book, this book is academic in its detail and nuance. You’ll come away having learned so much.

An intense read. An excellent resource for information on the war from a perspective most people don't think about. Will be passing along the recommendation to my history loving friends.

This is not a casual read but ore of a history book - an excellent one that belongs in academic libraries, (If you have read the book "The Guernsey Potato Peel Pie and Literary Society" you have a doubly good chance of liking this book even more.)

Dr Gilly Carr is Senior Lecturer and Academic Director in Archaeology at the University of Cambridge’s Institute of Continuing Education. She is a Fellow of St Catharine’s College. Her research interests are in the field of modern conflict archaeology, POW studies and heritage studies. Her most recent monographs include ‘Legacies of Occupation: Heritage, Memory and Archaeology in the Channel Islands’; ‘Protest, Defiance and Resistance in the Channel Islands: German Occupation 1940-1945’ (co-authored with Paul Sanders and Louise Willmot); and Victims of Nazism in the Channel Islands: A Legitimate Heritage? She has also published many journal articles and book chapters on the archaeology, history, heritage and legacy of military occupation, and on the material culture of internment.