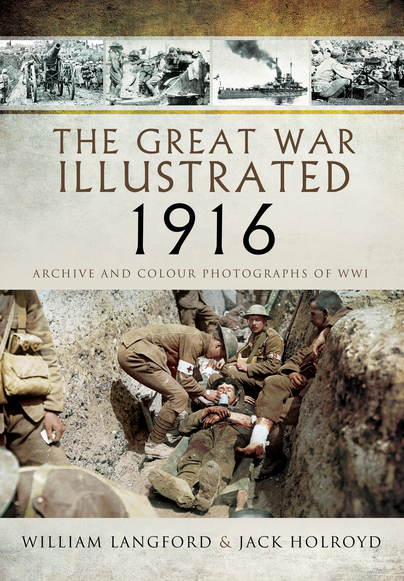 Click here for help on how to download our eBooks
Add to Basket
Add to Wishlist
You'll be £4.99 closer to your next £10.00 credit when you purchase The Great War Illustrated 1916. What's this?
Need a currency converter? Check XE.com for live rates

With conscription introduced, Zeppelins carrying out bombing raids on key towns and cities across England, the Battle of Jutland seeing fourteen British ships sunk and the Battle of the Somme claiming 20,000 British dead on the first day alone, the resolve of the British and allied troops in 1916 was being sorely tested. The Great War Illustrated 1916 is the third picture volume in this series that deals exclusively with actions fought throughout the year on the Western Front.

Split into five chapters, the authors begin with the British defeat at Kut, showing photographs from British and Turkish perspectives throughout the four-month campaign. The second chapter explores the new technological advances made by both sides throughout the year including new tanks, aircraft and guns. Photographs show the new equipment in action on the battlefield as well as being manufactured on production lines in the factories back home. We then turn to the Battle of Verdun, one of the largest battles of the First World War, before exploring the Battle of Jutland. Being the only full-scale naval clash of the entire First World War, the two-day battle saw twenty-five ships sunk and over 8,000 men killed on both sides and the authors analyse the battle in full detail, illustrating the ships that were involved and the men who sailed upon them. The concluding chapter explores the infamous Battle of the Somme, from the horrendous losses suffered on 1 July to the arduous battle of attrition that followed thereafter. Split into sub-sections, detailed analysis of the Australians, Canadians and British troops are featured along with a final section showing winter conditions in the area at the end of the year.

With over 1,300 painstakingly enhanced and restored photographs and a thirty-two page full colour section, the work within these pages represents a real labour of love and offers the reader an exceptional picture library of rare and unseen pictures that is easily accessible for the general reader and military enthusiast alike.

With over 1,300 restored photographs, and a thirty-two page full colour section (and this is amazing, we are so used to seeing only black-and-white images of the Great War), this book truly is a tremendous achievement. The text is just right, putting the photographs in proper context, without overwhelming them with words.

Food for thought here, this beautifully designed, printed and presented book (a credit to Pen & Sword, even by their own high standards) will stand the test of time. A hundred years from now it will still be as accessible and important, how many of today’s trendy gadgets can you say that about.

With over 1,300 painstakingly enhanced and restored photographs and a thirty-two page full colour section, the work within these pages represents a real labour of love and offers the reader an exceptional picture library of rare and unseen pictures that is easily accessible for the general reader and military enthusiast alike.

Maybe not glossy, but jam-packed with photographs from the Great War, this is a hefty treasure trove of images from 1916, including - perhaps surprisingly - a useful section in colour. Another whole section is devoted to weaponry and the industry producing it. Otherwise, the book focuses on battles at Verdun, Kut, Jutland and yes, the Somme. A welcome addition to anyone's library.

As a source of documentation for our figures, cartoons, dioramas, tables, etc., it is an invaluable visual piece of information.

An indispensable and essential book that can not fail in our library and you have to get at any price.

As featured on War History Online.

This is the third volume in Langford and Holroyd's defnitive visual history of the Great War, this time containing, obviously, photos from the battle of the Somme. It didn't change the war, in fact it changed very little, but the effect in terms of numbers of servicemen killed or wounded is something that strikes one numb with incredulity even a hundred years on, when memories should be fading. Another thing to bear in mind is the fact that many of the photos taken that show Tommies and Germans racing into no man's land etc., were staged for propaganda purposes - the trench scenes, the parade scenes were obviously real, but the lack of explosions in such action shots is a giveaway. This monumental work tells the story of the Great War in a way that cannot be expressed in words. It and its companion volumes have pride of place on my bookshelf and I recommend it to anyone with a passing or scholarly interest in WW1. Utterly amazing.