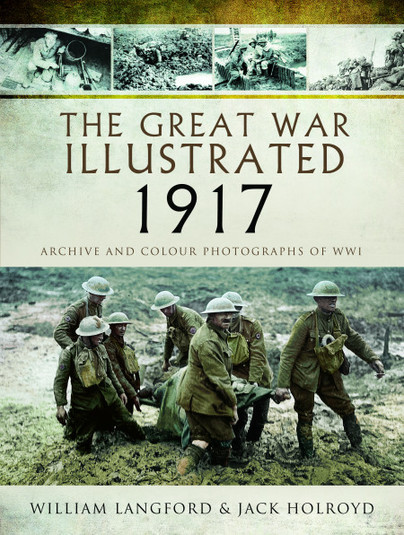 Click here for help on how to download our eBooks
Add to Basket
Add to Wishlist
You'll be £4.99 closer to your next £10.00 credit when you purchase The Great War Illustrated 1917. What's this?
Need a currency converter? Check XE.com for live rates

Fourth in a series of five titles which will cover each year of the war graphically. Countless thousands of pictures were taken by photographers on all sides during the First World War. These pictures appeared in the magazines, journals and newspapers of the time. Some illustrations went on to become part of post-war archives and have appeared, and continue to appear, in present-day publications and TV documentary programmes - many did not. The Great War Illustrated series, beginning with the year 1914, will include in its pages many rarely seen images with individual numbers allocated, and subsequently they will be lodged with the Taylor Library Archive for use by editors and authors.

The Great War Illustrated 1917 covers the battles at Arras, Passchendaele and Cambrai, the use of aviation and the role of the tanks. Some images will be familiar, and many will be seen for the first time by a new generation interested in the months that changed the world for ever.

The selection of 1,000 black-and-white and color photographs in The Great War Illustrated 1917 should be riveting for history buffs and inspirational for military miniatures hobbyists.

The fourth volume in this very worthwhile series which presents archive black and white and colour images of the war, this time from the year 1917. The collected images cover all aspects of the war on all fronts and, along with the previous volumes, comprises one of the best collections of images ever published for those with an interest in the Great War. The majority of the images are accompanied by short but descriptive captions, but it is the sheer abundance of images which is to be marvelled at. Collecting them together in these volumes is something the authors can be proud of and which we, as interested parties, can only thank them for. This work would make a wonderful addition to anyone's library and reference sources.

This wonderful book of 1,000 Archived colour photographs from the Great War provides a superb window into what life was like during the First World War for the soldiers on the Western Front, and the men at sea and air. Whilst quite a number of the photographs will be familiar for anyone with more than a passing interest in this conflict, there are many more that will never had been seen before. In turn, it provides a useful addition to the bookshelf of any enthusiast of the Great War, while at the same time would be a fantastic gift for a person who had a wider interest in photographs, or indeed conflict generally.

In this 100th anniversary year this new book from Pen and Sword gives an amazing collection of over 1,000 archive images of the events of 4th year of the war. Adding to the previous titles in the series which cover the three previous years of the war, 1914, 1915 and 1916 we see the changing faces of the new mechanised warfare along with the devastation it brought to parts of France and Belgium.

An indispensable work that can not be missing in our library.

The 1917 volume of this ground breaking series contains 1,000 images from the Great War, with a middle section in full colour. Many of the photographs will have been seen before by varius people in a number of books, but their collection in this magnificent volume is its own tribute to the men who were sacrificed by the generals in a war that was meant to end in December 1914. Moving and thought provoking at the same time, and certainly not for the faint-hearted! A fitting tribute in every sense.

The publisher has pulled out all the stops to make this a memorable Great War Centenary. This is the latest in one of the special series to commemorate WWI. The series reaches 1917 in this book and lays out in an outstanding photographic presentation the year that many claim as the turning point in favour of the Allies – Highly Recommended.