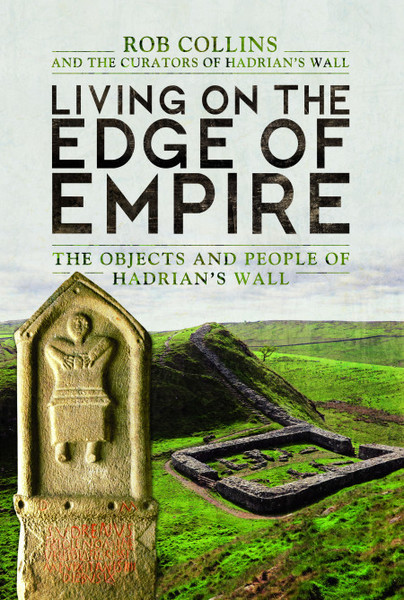 Living on the Edge of Empire (Hardback)

The Objects and People of Hadrian's Wall

An article written by contributor Barbara Birley for Dan Snow's History Hit: 'What Do We Know About the People of Roman Vindolanda?'

You'll be £25.00 closer to your next £10.00 credit when you purchase Living on the Edge of Empire. What's this?
+£4.50 UK Delivery or free UK delivery if order is over £35
(click here for international delivery rates)

Dr Rob Collins and the curators of the remarkable collections from Hadrian's Wall present a striking new contribution to understanding the archaeology of a Roman frontier.

This highly-illustrated volume showcases the artefacts recovered from archaeological investigations along Hadrian's Wall in order to examine the daily lives of those living along the Northern Frontier of the Roman Empire. Presented by theme, no other book offers such a diverse and thorough range of the rich material culture of the Wall.

The accompanying text provides an ethnographic perspective, guiding us through the everyday lives of the people of frontier communities, from the Commanding Officer to the local farmer. This holistic view allows us an insight into the homes and communities, how people dressed, what they ate and drank, their religions and beliefs, domestic and military forms of security, and how they conducted their business and pleasure.

Archaeological documentation of enormous interest on the Roman world.

Living on the Edge of Empire is more than a collection of photographs of finds from Hadrian’s Wall; it serves as a useful primer to the Wall as a focal point for community life in all its variety. Collins has assembled an impressive range of materials, which reveal that sometimes the most significant finds come from the most commonplace items. Vindolanda features heavily in the array of objects, which is appropriate given how much has been carried out there. That might skew the picture of the whole Wall, but I think there is enough from other sources to provide balance. Collins’ text matches the artefacts in its clarity, with the final result being a neatly organised and illuminating book. If you cannot visit Hadrian’s Wall, this book might be the next best thing.

The book stems from a fruitful collaboration, bringing together the academic expertise of Rob Collins (its principal author) with the curatorial eye of various specialists in the museums and centres along Hadrian’s Wall. What really sets the volume apart, though, is the quality of its illustrations: selected ‘from a fraction of the many thousands of objects that could be illustrated’, printed on thick, glossy paper, and reproduced mainly in colour. The authors take seriously the charge of immersing readers into a world by turns familiar and strange).

With so many of the objects described and set in context in this fine book, it gives no more than a brief bright flash of lives once led, and yet provides such a spark for the imagination.

The book is filled with beautiful pictures of many of the items found and these are used to illustrate the nine chapters. These sections include life in the frontier, clothing, business and leisure, religion and one of my favourites ‘unknowns’; items which truly baffle the experts.

I’ve always enjoyed the idea of digging up treasures left from bygone years and I was a fan of television’s Time Team for years, so this book held my interest. I’ve yet to visit Hadrian’s Wall, but it is on my wish list.

It is rare that an archaeological book can be described as beautiful, but this one truly is. It is an essential book for anyone with an interest in the material culture of the Roman frontiers in its wider context.

This I must say is a very nice and smart looking book, very easy on the eye and the photographs of the various artefacts look great. What is also very good is the accompanying text about each item. It is clearly well written and accurate as it is written by the curators of the collections inside the book. There is also plenty of artefacts to look at and read about, one chapter doesn’t over shadow the other at all, everything has a good and equal share. What I really enjoyed was the very small items and the colourful bits of jewellery, which considering how small they are, it’s amazing how long they have survived. Towards the back of the book is a section on various sites to visit and also an excellent reference section which identifies every item in the book into a easy to read table. This book has been made it seems with great care and pleasure, certainly I would expect to find in a museum and really does show off fantastic items in its little exhibition. A very good 4.5 star rating.

A really interesting and well researched book that helped to learn a lot about life at the edge of the Roman Empire.
I strongly recommend it.

Interesting look into the past. Told through the interpretation of objects found in or near Hadrian's Wall, and explaining their uses and how they related to daily life. Very well illustrated. Just very interesting!

Wonderful and detailed book which opens up a new world of living on the edge of the Roman empire. Just simply, REALLY interesting.

A lot of primary objects shown within the text - almost the text is supporting the images. More of a visual and context of the time and the topic. Great for those who want a visual of the Roman Empire at the edge of its control.

From a military history perspective, it is hard for me to describe how much I enjoyed ‘Living on the Edge of Empire’. I really found the book hard to put down.
All readers will appreciate the wealth of fascinating photographs, the majority of which I hadn’t seen before. Most of the objects are in an amazing state of preservation considering their age, and give a moving insight into people’s everyday life on the bleak forbidding frontier.
Dr. Rob Collins and his team of curators pitch the narrative descriptions at the right level for general readers as well as aspiring historians. I particularly liked the fact that Collins also included non-military sections of the book – religions, the local populace, various crafts and some as yet unidentified objects.

As someone who has visited several sites along Hadrian's Wall, I thought this book would just be a nice reminder of my visits, but it is so much more. Anyone planning a trip along Hadrian's Wall really should have this book with them - or read it just before they go. When most people think of the Wall, Roman soldiers come to mind first and foremost. This book teaches us about the everyday people and their lives - as much as the archaeology allows. The photos are amazing (I think I spent far longer looking at them than actually reading!), and the section of items that haven't been figure out yet will have you puzzling over them.
A really great book for lovers of Roman history and those with a passing interest.

Read this as a supplement to my other reading material as a classical studies student.

This was a well laid out depiction of life on the edge of the Roman Empire. I am local to the area so am inspired to make another visit to Hadrian's wall!

The material chosen to appear is very relevant, and I found this to be well researched and written!

This was a really cool way to teach about life along Hadrian's Wall. I learned quite a bit... overall this was great.

An easy to read, comprehensive and interesting look on both civilian and military life along Hadrian's Wall. Roman Britain is something that I'm personally interested about, and this book gave a great view into that side of British history in a way that was very easy to understand and made me want to learn more about it.

The pictures made it easy to visualise the finds and put them into context.

Living on the Edge of Empire: The Objects and People of Hadrian’s Wall is a lavishly illustrated glimpse at the daily lives of soldiers and others who lived in and along Hadrian’s Wall during the several centuries it was occupied by the Romans. While there are more academic works available, this is an excellent read for non-researchers or for those who might want an introduction to more difficult, comprehensive works, say a writer planning on setting a story in Roman Britain.

Following the introduction, Collins divides the book into eight sections: the makeup of the communities and homes, dress, food and drink, weapons and armor, daily business and entertainment, religious beliefs, “unknowns” (more on this later), and the post-Roman years of the wall. As noted, the book is chock-full of photographs illustrating the archaeological conclusions regarding types of food eaten, shoes worn, weapons wielded, etc. This is absolutely the highlight of the book. The photographic detail is vividly sharp, and while most of the objects show the expected signs of their age, some of them are in shockingly good shape, allowing the reader to fully imagine them in the hands of a Roman soldier as they drank or diced.

The text, meanwhile, is efficient, informative, and clear throughout. Collins does a good job of avoiding being overly generalizing in his approach, making necessary distinctions when necessary in terms of class or regional background, noting for instance that most inhabitants probably slept on simple floor pallets, while those who could afford more luxurious accommodations might have a bed and a hay-filled mattress, and those even further up the social status ladder would fill their mattresses with wool or feathers. One of the more fascinating sections is the religious one, as Collins goes beyond the traditional Roman pantheon most readers will already be well aware of, discussing not only nearly-as-well-known mystery cults like Mithras, but also hyper-local gods whose names are found on shrines, amulets, and the like. I also loved that Collins included the “unknowns” section, which details multiple objects whose purposes we can only guess at, such as a series of dodecahedrons whose creation required “a skilled craftsperson” (some possible uses: game pieces, part of a regularly-used scepter or standard, a surveying tool). I enjoyed this section because it showed Collins as being happy to admit that there’s a lot we don’t know, even when we have objects of study in hand.

In his introduction Collins says “it is my sincere hope that this approach will prove entertaining and illuminating, as well as injecting some humanity into our understanding of the past. Mission accomplished.

Roman Britain comes to life with gorgeous photos of items excavated around Hadrian’s Wall, from everyday artifacts to items belonging to the soldiers that manned the wall. Readers get a peek into the lives of ancient Britons and the Roman soldiers living in their midst. A must for lovers of history and archaeology.

Jane Laskey is the Museum Manager of Senhouse Roman Museum.

Dr Frances McIntosh is Curator of Hadrian’s Wall and the North East for English Heritage.

Andrew Parkin is Keeper of Archaeology at the Great North Museum: Hancock.

Dr Rob Collins is a Lecturer in Archaeology at Newcastle University.