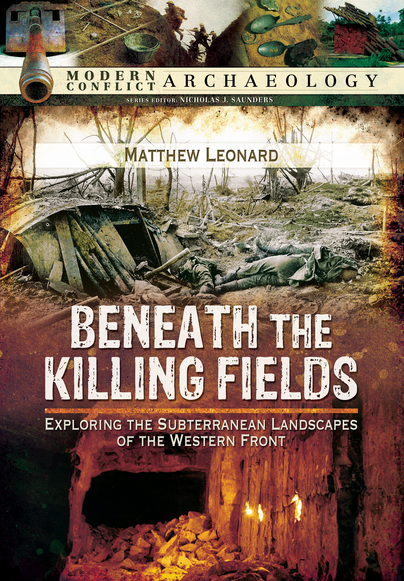 Beneath the Killing Fields (Hardback)

Exploring the Subterranean Landscapes of the Western Front

You'll be £19.99 closer to your next £10.00 credit when you purchase Beneath the Killing Fields. What's this?
+£4.50 UK Delivery or free UK delivery if order is over £40
(click here for international delivery rates)

Beneath the Killing Fields of the Western Front still lies a hidden landscape of industrialised conflict virtually untouched since 1918. This subterranean world is an ambiguous environment filled with material culture that that objectifies the scope and depth of human interaction with the diverse conflict landscapes of modern war.

Covering the military reasoning for taking the war underground, as well as exploring the way that human beings interacted with these extraordinary alien environments, this book provides a more all-encompassing overview of the Western Front. The underground war was intrinsic to trench warfare and involved far more than simply trying to destroy the enemy’s trenches from below. It also served as a home to thousands of men, protecting them from the metallic landscapes of the surface.

With the aid of cutting edge fieldwork conducted by the author in these subterranean locales, this book combines military history, archaeology and anthropology together with primary data and unique imagery of British, French, German and American underground defences in order to explore the realities of subterranean warfare on the Western Front, and the effects on the human body and mind that living and fighting underground inevitably entailed.

“Read Beneath the Killing Fields to develop a very different perspective of the war, how it was fought and its affects upon the combatants.”

I recommend this book because it examines a very interesting aspect of trench warfare.

A very interesting and well documented work for those history lovers who like stories based on real events.

The extensive use of illustration adds greatly to the text, with photographs of digs in progress helping to convey the work of the archaeologist – Very Highly Recommended

A fascinating read, and one which adds much to the history of WW1, so much more than simply trench warfare.
​
See the full review here

This book is primarily a written offering.

It is fascinating to read more.

Beneath the Killing Fields

The book is an excellent testimony of this type of war, it is written very well and accompanied by photos that make us understand the emotional dimension of the soldiers who were involved. The victims of this war of materials, so imposing as to crush every individual on the surface, brings to the fore the stories and testimonies (where there are, what has been dug I think is only a small part of the historical heritage available) of those who instead they found themselves below, digging and dying.

Read Beneath the Killing Fields to develop a very different perspective of the war, how it was fought, and its effects upon the combatants. The war was even more wretched than we thought.

Leonard, with lots of useful photographs, thoughtfully introduces us to this arena of war.

A well-written, deeply researched account of a unique type of warfare which also found a place in WW2 in the Pacific Islands like Okinawa, held to the very last man by the Japanese.

It is highly recommended especially for it's insight into the psychology of the men who dug, fought , lived or died in the blackness below the killing fields of Flanders.

This book is a thoroughly absorbing study of underground warfare during the First World War and how it evolved.

I highly recommend this book to anyone who wants to understand the part played in the First World War of this underground world.

A very good exploration of the underground war. I was particularly interested in the work at Loos and had not fully appreciated the denial of the coal mine workings to both sides and the reasons therefore.
I have always asked battlefield visitors to think on the problem of being underground in total darkness, not knowing if the nearby sound you just heard was made by friend or foe; and what would you do? This book works hard to connect the physical to the emotional via the unknown; it does not answer my question but it makes one think more deeply about it. Recommended.
Michael McCarthy. Battlefield Guide

Apart from the power of words as expressed in the verse of the war poets; including some of the first-hand accounts of those engaged in the battlefields of World War I, this book has brought me new and fresh understanding on a conflict remember now from 100 years distant.
That historians can find new and definitive insights into this conflict especially along the Western Front is both fascinating and a ground breaking as any recent archaeological dig.
Matthew Leonard has written a remarkably skilful and academic account that should become a standard go to volume of this subject the war underground and the changes it brought to the battles. Furthermore, he has reached out to embrace other disciplines to ensure the whole picture is clearer and better understood,
His personal activity underground and the work of The Durand Group forge the main insights these studies and explorations of the underground systems have determined and cemented understanding. I liked the aspects of the changes in men's perspectives living in close quarters with their fellow soldiers and the enemy. The author explains this well and tackles the language used elsewhere that degrades the humanity of the combatants to just animalistic responses. Rather the tunnels and graffiti found have on the contrary shown the depth of humanity and the care for each other.
While many of the memorials and exhibitions commemorating the Western Front have tried to reconstruct and make the visitor understand life of the soldier. This book has gone further and by literally following in the footsteps of those digging and tunnelling, or listening and waiting underground new ideas and sensual understanding has been discovered that has given deeper empathy and engagement with a history that has become more real to me through this book.
I recently had the opportunity to visit Arras and Vimy Ridge while in Northern France and the thrust of this book 80% read made the experience more vivid and memorable and going around the 14 - 18 at Lens museum more meaningful.

Matthew Leonard’s research is concerned with the engagement of man and the underground worlds of the Western Front during the First World War. As a conflict archaeologist, Matthew’s research adopts a modern interdisciplinary approach, incorporating elements of several disciplines to examine how these subterranean landscapes were created and experienced, and how existentialism, sensorial interaction and the human body coped with the extreme pressures of war life underground. He is a member of the Durand Group and carries out regular fieldwork in France beneath the battlefields of the First World War. More information concerning his research can be found at www.modernconflictarchaeology.com