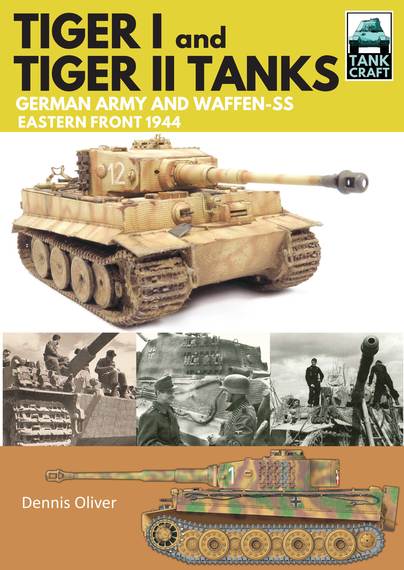 Tank Craft 1: Tiger I and Tiger II: Tanks of the German Army and Waffen-SS (Paperback)

Add to Basket
Add to Wishlist
You'll be £14.99 closer to your next £10.00 credit when you purchase Tank Craft 1: Tiger I and Tiger II: Tanks of the German Army and Waffen-SS. What's this?
+£4.50 UK Delivery or free UK delivery if order is over £35
(click here for international delivery rates)

In spite of the relatively small numbers produced, the Tiger I and Tiger II tanks are arguably the most famous armoured fighting vehicles of the Second World War. This book, the first in the TankCraft series, uses archive photos and extensively researched colour illustrations to examine the tanks and units of the German Army and Waffen-SS heavy panzer battalions that attempted to hold back the Red Army during 1944.
A large part of the book showcases available model kits and aftermarket products, complemented by a gallery of beautifully constructed and painted models in various scales. Technical details as well as modifications introduced during production and in the field are also examined providing everything the modeller needs to recreate an accurate representation of the tanks that fought from the snow covered fields of Byelorussia and the Ukraine, through the Baltic States and into Poland and Hungary.

Will be of great interest to modelers that plan to build a Tiger tank and to military historians alike.

The unit and colour/marking elements are a notable highlight, providing modellers with useful organisational and camouflage information.

Another excellent addition to the TankCraft series of books, aimed primarily at modellers, but applicable to an even wider readership. The Tiger I and Tiger II were a major advance technically although their weight and reliability limited them in achieving their full potential – Very Highly Recommended

Taken alone or in conjunction with Oliver's other Tiger titles in this series, this is a very useful book. One I'm very chuffed to have.

This is a great addition to the range of books covering tanks and authored by Dennis Oliver has made a stunning offering with this title considering the amount of space he had available and he has authored a title that all modellers should make space for in their library.

The first book in the Tank Craft series and a book/series that I have come to love immensely. Dennis Oliver compiles a nice selection of Tiger tank photos and modeling builds. Thanks to Pen & Sword for publishing quality books such as these.

It's an enjoyable book for a wargamer, but probably essential for a modeller?

A highly recommended source of inspiration and ideas for diorama and model builders looking to build a Tiger tank.

From a technical standpoint the book is a winner. Throw in all of the unit histories and then add the modelling, and it is a superb book on the Tiger I-II tanks.

This is one neat book. Lots of color schemes to please modelers and info about available kits.

Aimed squarely at modelers, this book combines a brief reference section including color profiles with a survey of Tiger I and II kits and accessories. A gallery of models built by several people rounds out the volume. While much of the research may seem brief to Tiger experts, this is a great book for anyone interested in building either of the German heavies.

All in all, a good and inexpensive reference.

The publishers have a deserved reputation within the model making community for the high quality of their Craft series. Tank Craft books are very well produced and presented and this
new book is well up to that standard. It will also appeal to those who are interested in armoured vehicles and WWII. Much Recommended.

Dennis Oliver Strikes Back with Tiger I and Tiger II Tanks in the new series Tank Craft. Proposed as a book to approach historically the Tiger Tanks I and II. The book extensively analyses their use in 1944, with a few historical references of the various units that employed them, Dennis draws a concise history, full of new ideas.
Very beautiful colour profiles, alignments, and a careful study of the historical photos and after comparisons with some industry experts. To top it all off, this is an interesting appendage of modelling. This is a book for quality/price. I recommend that those interested in the history of Panzerwaffe get his book.

Tiger I and Tiger II tanks makes for the first in this new series of Tank Craft books from Pen and Sword. It forms a natural progression as they already do similar style books covering Ship Craft and Flight Craft series. This 64-page book doesn't try to be the definitive work on the Tiger, and there is plenty of material available already. What it does do is provide a useful guide for modellers wanting a handy guide to the tanks, along with some first class models along with details of the various kits and accessory sets that are on the market from a range of manufacturers.

It starts off with the development background and then details of the various units that were equipped with the Tiger on the Eastern Front during the later half of WW2. It outlines the story of each unit, and includes tables showing Equipment Allocations and Losses during the period, and does include some archive photos as well. This leads nicely into a 10 page section with colour profiles showing unit and individual markings, as well as camouflage schemes. This in turn is followed by 13 pages of Modellers' Showcases, with some very fine models on show, including 4 different Tiger I's, 1 Sturmtiger and 1 King Tiger.

Next is a section which lists all the different kits available from the various manufacturers and in the variety of scales as well. These also feature the various accessory sets that are on the market for the Tiger, such as turned brass gun barrels, etched brass detailing sets (some of which are extensive) and individual metal track links as well. Starting again on page 52, we get back to the historical detailing of this time, the Waffen SS units, again with details of their Equipment Allocations and Losses during the later stages of the war. For the final few pages, there is a section on the Technical Details and Modifications, which highlights the detail differences that were applied to the tanks during their service life, again a very useful reference for modellers as well as assisting the historian with identification features for archive photos.

A good start to this new series, and perhaps the most likely subject for the first one, as the Tiger remains an ever popular subject.