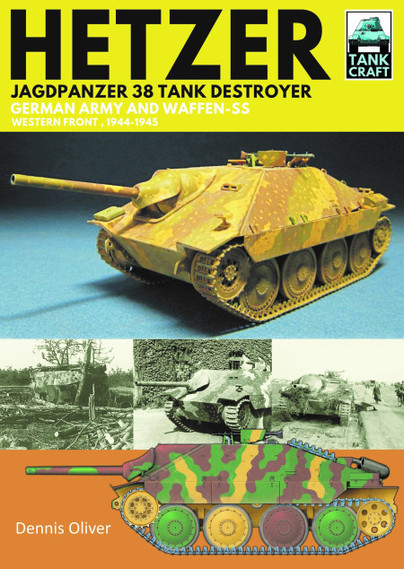 Add to Basket
Add to Wishlist
You'll be £16.99 closer to your next £10.00 credit when you purchase Tank Craft 29: Hetzer - Jagdpanzer 38 Tank Destroyer. What's this?
+£4.50 UK Delivery or free UK delivery if order is over £35
(click here for international delivery rates)

By 1944 the German army was on the defensive on all fronts and Allied bombing was putting increasing pressure on the nation's industrial output. Since the earliest days of the war the Germans had experimented with mounting anti-tank weapons on obsolete chassis and one of the most successful of these would prove to be the Jagdpanzer 38, more often referred to today as the Hetzer. Small and unimposing the Hetzer's appearance belied its effectiveness. Armed with the powerful 7.5cm L/48 gun, the same weapon fitted to the Jadgpanzer IV, the Hetzer featured armour sloped armour plates of up to 60mm thickness and was capable of a top speed of 42 kilometres per hour. Almost 3,000 examples were assembled and its low cost and ease of production meant that it was Germany's most important tank killer of the late war period. In his latest book in the TankCraft series Dennis Oliver uses archive photos and extensively researched colour illustrations to examine the Hetzer tank destroyers and the units of the German Army and Waffen-SS that operated them during the last months of the Second World war. A key section of his book displays available model kits and aftermarket products, complemented by a gallery of beautifully constructed and painted models in various scales. Technical details as well as modifications introduced during production and in the field are also examined providing everything the modeller needs to recreate an accurate representation of these historic tanks.

As well as the usual modelling products section, and technical details/modifications, there’s a bit about the non-Heer (SS and other) units. Plenty of pictures, from wartime black and white stuff to the colourful profiles and models, this an attractive publication.


A Question of Scale

One of the lesser-known vehicles of World War Two, the German Hetzer was used towards the end of the war. I personally believe this vehicle is lesser-known because as Germany came towards the end of the war the ability to manufacture and build top of the range vehicles like tanks was getting harder with military materials and a skilled labour force being in a shorter supply. The book like the previous books in this series starts off with a background, design knowledge and history, perfectly good and balanced for the size of the book. The section then rolls into being about the artwork and a great range of models and camouflage designs dependent on the terrain and theatre of war. Although there is not as much history in these books as there would be an ‘ordinary’ book, I really like seeing all the designs and models. Maybe in the future, I should become a modeller as these books are the perfect book for model makers.

“I thoroughly recommend this book for all scale modelers as well as those interested in German WW II armor and markings.”

"...the images for the modeler, dioramist, and wargamer are spectacular..."

"There is then a fairly large section of large profiles, often accompanied by a photo of the vehicle in question."

Dennis Oliver is well known for his many books on the armour of World War II (several in the Tank Craft range) and his comprehensive and meticulous research shines through in this book. The colour illustrations are particularly worthy of note and these together with the models in the model show case will inspire many model makers. Military historians interested in the Western Front after D Day will find much of interest here as will model makers interested in this German AFV.

This book is produced to the usual high standard of Dennis Oliver, and provides a valuable source of pictures and information for Modellers, Wargamers and the interested reader. It follows the familiar format of sections covering the design, development and rational of the Hetzer.

A section follows on the organisation of Army (Heer) units on the Western front, with ten colour plates of drawings of examples of camouflage patterns. A second colour section of models and information on model kits and after market products is rounded off by an organisational section for the Waffen-SS, and technical details to enable the reader to differentiate between different models of the Hetzer.

I always learn something from these monographs; in this case the driving factors behind the heavy late-war production of the Hetzer being the Allied bombing of the Alkett factory, and the inter-arm rivalry between the artillery and Panzer arms of the Wehrmacht. As expected, this book does not disappoint.

The Hetzer is a popular modelling subject, and is notable in my mind for being one AFV which for some time had a standardised factory applied camouflage pattern, something quite different to other German AFVs in the late war schemes. A well balanced book with the historical story mixed with plenty of inspiration for modellers.

I always like reading this author’s books and this subject is delivered with his usual eye for detail and for focused background information. Recommended.