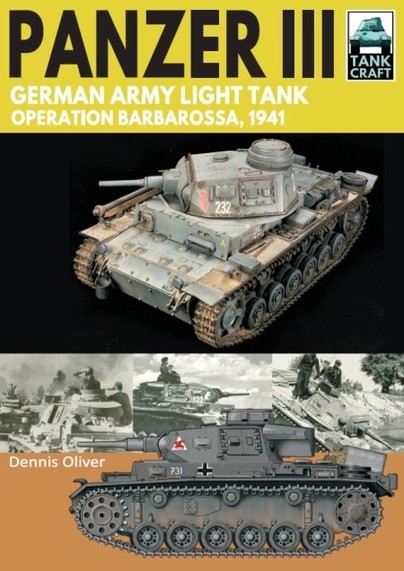 Add to Basket
Add to Wishlist
You'll be £16.99 closer to your next £10.00 credit when you purchase Tank Craft 27: Panzer III: German Army Light Tank. What's this?
+£4.50 UK Delivery or free UK delivery if order is over £35
(click here for international delivery rates)

This welcome addition to the Tank Craft series of books was first published in 2019. It follows the familiar format of an introduction to set the development of the tank in context, an operational history including unit histories, orders of battle, followed by lavish and detailed artwork with technical details of the different variants as they evolved.

The book is aimed squarely at modellers and wargamers, who will find much to interest them in its 64 pages. Of particular interest to wargamers is a table setting out the strengths of the panzer divisions involved in Barbarossa, at the start of the campaign. The contemporary photographs are well-chosen and support the text. An interested reader will have no trouble identifying and understanding the development of the Pz III having read through pages 59 to 63.

Author Dennis Oliver is a well-known and respected authority on German AFVs of World War II and has written many of the Tank Craft series of books. His well-researched text and captions are up to his usual high standard. This book will prove invaluable for model makers and military historians interested in this often overlooked but important AFV. This is another great addition to the Tank Craft series and is highly recommended to all.

Well worth picking up.

The TankCraft books are always welcome additions to my resource collection as inspiration for new projects and paint schemes or to pick out details I might have missed in a build...The photos are interesting and not common ones you see in the typical history books. Overall, a fantastic read.

This offering from Pen and Sword as part of their Tank Craft book series and this time looking at the Panzer III is another great addition to the series. Looking over this title it is hard to pick fault.

Dennis Oliver must be congratulated on his hard work in writing this book.

Another excellent addition to the TankCraft series of books, aimed primarily at modellers, but applicable to an even wider readership. The Panzer III is described as it was deployed for Operation Barbarossa with the usual high quality images for which this series is renowned – Very Highly Recommended