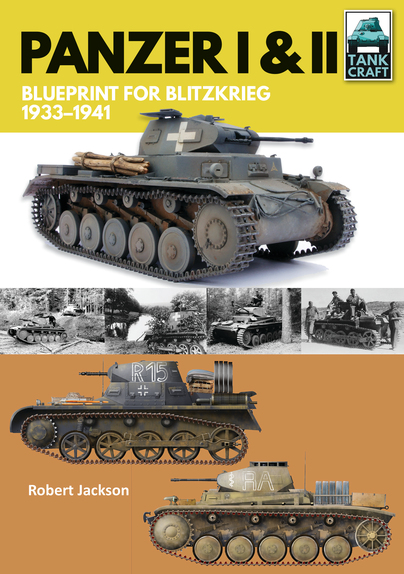 Add to Basket
Add to Wishlist
You'll be £8.99 closer to your next £10.00 credit when you purchase Tank Craft 7: Panzer I and II. What's this?
+£4.50 UK Delivery or free UK delivery if order is over £35
(click here for international delivery rates)

The Panzer I and II played a significant part in the blitzkrieg campaigns that brought Germany such extraordinary success in the early years of the Second World War, and this highly illustrated volume in the TankCraft series is the ideal introduction to them.

The Treaty of Versailles forbade Germany to manufacture tanks so the Panzer I had to be developed in strict secrecy, but by the time of the invasion of Poland the Wehrmacht had over 1400 of these light tanks. The Panzer II was an interim design, bridging the gap between the Panzer I and subsequent, far more viable armoured fighting vehicles like the Panzer III and IV.

As well as tracing the history of the Panzer I and II, Robert Jackson's book is an excellent source of reference for the modeller, providing details of available kits, together with artworks showing the colour schemes applied to these tanks. Each section of the book is supported by a wealth of wartime photographs as well as diagrams showing the technical changes that were made to these tanks in the course of their careers.

The Tank Craft series of books is invaluable for model makers and this coverage of the early Panzers fits in well with the other books in the series. Robert Jackson is clearly very knowledgeable on the subject and the numerous photographs of the early AFVs help illustrate their history and use in service.

Highly recommended to model makers and historians interested these early German Panzers. This book will invariably be very popular.

Robert Jackson has done an exceptional job with this title as he has not tried to cover the Panzer I and II from every nut and bolt, but he has tackled it in a way that has presented some interesting facts and in an enjoyable reading style. The period black and white photographs are well chosen and supplied with well written captions. I would have liked to see the print section cover both of these vehicles from more than one angle as I feel there was room if they did away with a couple of the finished models. The section looking at the Panzer I and II in combat is a particularly pleasing read and I found it an enjoyable way to close the title with.

What a great addition to the Tank Craft series by Robert Jackson. This is the tank that Blitzkrieged across Europe. From North Africa to the Soviet Union this was the most widely used light tank by Germany until 1942. A great book and well worth the low cost to have as part of the library.

I love it. Another privileged documentation for the model of battle tanks.

There's no doubting this is a reasonably priced book and like the rest of the series, will appeal to a number of market sectors, including vehicle historians, enthusiasts and of course - model makers. As such it is well worth checking out.

This popular series is aimed primarily at model makers and engineers but it contains first class illustration and a very effective text overview of the Panzer I & II. This new book covers the first two tank models issued to the new Wehrmacht – Highly Recommended.

A handy historical reference for these early Panzers and with significant elements clearly aiming this at modellers.