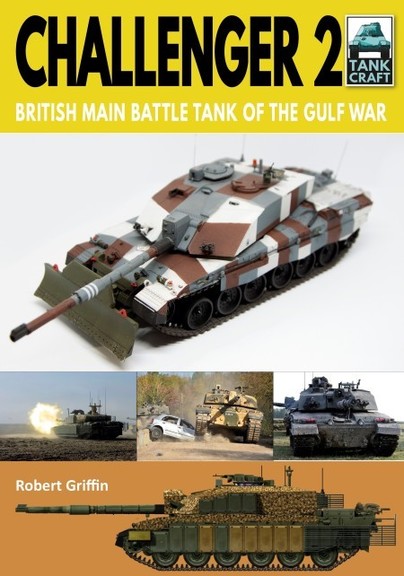 Add to Basket
Add to Wishlist
You'll be £11.89 closer to your next £10.00 credit when you purchase Tank Craft 23: Challenger 2. What's this?
+£4.50 UK Delivery or free UK delivery if order is over £35
(click here for international delivery rates)

The pioneering tank crew of the First World War would be astonished by the advances made in the design of armoured fighting vehicles over the last 100 years which have resulted in the Challenger 2, the current main battle tank in service with the British army. In terms of its speed, manoeuvrability and firepower, and the protection it provides for its crew, the Challenger 2 is one of the most advanced and sophisticated tanks ever built, and it is a popular subject with tank modellers and enthusiasts. That is why this volume in the TankCraft series on the Challenger, featuring hundreds of photographs and specially commissioned colour profiles, is absorbing reading and such a valuable work of reference.

Archive photos of the Challenger 2 in service and extensively researched colour profile illustrations depict the tank throughout its operational life. A large part of the book showcases available model kits and aftermarket products, complemented by a gallery of beautifully constructed and painted models in various scales. Technical details as well as modifications introduced during production and in the field are also examined and provide everything the modeller needs to recreate an accurate representation of the Challenger 2.

Like every volume in the series, this one also completely fulfills its task: it is a very pleasant introduction to the tank, with a high-level technical explanation, beautiful photos and great use for the model maker. We are therefore faced with another volume that cannot be missing on the shelves of those who already have other volumes in the series or who want to try their hand at building this beautiful tank!

... This is a good introduction to the subject and contains a very useful guide to the models and accessories available ...

As usual with a book from the Tank Craft series I’m always impressed with the number of photos, illustrations and information provided on the tank. As I’ve said in previous reviews of books from the Tank Craft range, these are great reference books for both modellers and war gamers. This particular volume is no exception to this, it’s a perfect book for anyone wanting a guide to the Challenger 2. I’m quite happy that this will sit on my modern warfare shelf, as I found it very useful when building my British force for Team Yankee.

So, if you’re looking to play games set in the modern era, then this will be a useful addition to your research materials. It has a very good section on the different model kits that can be purchased of this tank, along with some stunning images of built 1/35 kits. You won’t be disappointed picking this book up or any other from the Tank craft range.

This book is another great addition to the Tank Craft series. Model makers building the Challenger 2 will find much of interest in the close up photographs and the model show case will inspire. There are other books written on this most modern AFV and whilst this book is unashamedly aimed at the model maker there is much here to interest those specialising in modern tanks. Highly recommended to all interested in this iconic Main Battle Tank.

Verdict: ... the books provide an excellent portrait of the Challenger 1 and Challenger 2 tanks, which are becoming increasingly popular with modellers.

Another volume in the terrific series, especially if you are a modeler or seek camouflage patterns for your minis.

I can definitely say that this book is a must for anyone wanting to build a Challenger 2...Highly recommended for beginner to advanced builders.

A fine addition to the Tank Craft series and from an author who genuinely 'knows his stuff'. A real boon for fans of modern tank models.